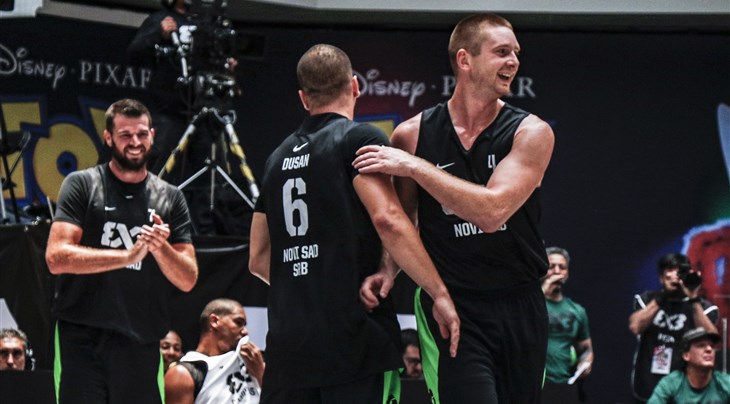 UTSUNOMIYA (Japan) - This season has been ridiculously loaded and competitive. With upsets and new teams emerging, the World Tour has been more unpredictable than black jack, the other 21-point game.

All 12 teams will be dreaming of championship glory at the Utsunomiya Final and each of them has at least one reason to be confident of their chances.

Amsterdam has been overtaken by several new shiny teams this season. It's easy to overlook them. At your peril. These guys have been playing together for years and have more chemistry than Arnie and Linda Hamilton in the new Terminator flick.

Dimeo van der Horst can win games by himself and you know big man Jesper Jobse always goes to work.

The Canadians have taken the World Tour by storm this season and are confident after winning their first Masters in Nanjing earlier this month. Steve Sir is the best shooter on the planet, give him the Nobel Two-Piece Prize.

Strong drives to the rim is Jordan Baker's bread and butter. And it can be easy to overlook the silky smooth Jordan Jensen-Whyte, who when aggressive can be unstoppable cause he's more Athletic than Shams Charania.

Jeddah made an impact in the second half of the season making three knockout stages of Masters. They even finished fourth in Debrecen, where they beat Liman and Princeton.

This is a team on the rise with no fear. That's a dangerous combination.

If wins were given based on highlights, this team would have more titles than Novi Sad.

The Swiss team barely made it to the Final (12th in the standings). Still they made the semi-finals in their home Masters mid-year and knocked off Liman along the way. See, they can beat anyone!

Maybe this is their moment to shine. On the biggest stage of all. Against the best in the business.

Thanks to your support during this incredible season, we made it to the WORLD TOUR FINAL in Utsunomiya the 2-3 November !!! Follow our last tournament of the year 🙏🏽 • • We will face @liman3x3 (#1 of the #3x3WT) and Piran. • • We will post the time and the link before the tournament. • • 🎥 Thanks to the pirate 🏴‍☠️ @zimydakid for the video 🔥 • • #fiba3x3 #final #japan #utsunomiya #tokyo #swiss #switzerland #suisse #lausanne #teamlausanne #follow

Liman only won one Masters this season. That does not do their incredible season justice. They were the only team to play in every Masters - most of them without superstar Stefan Stojacic.

Even without Mr Robot's cheat code, Liman found a way - even amazingly winning the Debrecen Masters playing without a sub!

These dudes have more fight than Mike Tyson. And if the Tour's leading scorer Mihailo Vasic gets going, look out!

This hasn't been easy for the defending champions who had more Ws last year than the World Wide Web. Since back-to-back Masters triumphs in Chengdu and Mexico City, the Serbs have gone cold in their past five attempts. Teams no longer are scared of them.

Beware of the wounded champion. Dusan Bulut has still produced at insane levels but Novi Sad's key might be Dejan Majstorovic who has been hot and cold this season.

If the Maestro can rediscover his magical touch then Novi Sad could have the last laugh.

The champs are back! Dejan Majstorovic ices the game for Novi Sad 🇷🇸 in the final vs. Riga Ghetto 🇱🇻 at the #3x3WT Chengdu Masters. pic.twitter.com/4ucusKeIRZ

The New Yorkers have more firepower than a Fortnite gamer. If Dominque Jones doesn't get you, new sensations Kidani Brutus and Joey King will. And they have big fella Marcel Esonwune dominating the air to have all bases covered.

NY Harlem used to tease but have truly came of age this season culminating in their historic Lausanne Masters title.

When this team is cooking, it's over!

Simon Finzgar and Gasper Ovnik and that entire Piran team has a bigger IQ than Bradley Cooper in Limitless. The dynamic duo routinely school younger players with sublime passes and always being in the right position. They make them look like Bradley Cooper in The Hangover. This team has been on the Tour since Year 1 in 2012 and you thought they'd start to slow down a bit. But they managed to win another title at the Saskatoon Masters again this year.

Just like NY Harlem, Princeton have come of age this season and triumphed at the Los Angeles Masters just last month - without star Robbie Hummel!

They have all the ingredients to be the best in the business. Hummel - with his great size and smooth shooting ability - can at any time be the best player on the court.

Kareem Maddox is a high-flying beast and dominates the paint, but has also dangerously added a two-piece to his arsenal.

Craig Moore is always looking for more behind the arc, while Damon Huffman along with Maddox and Hummel is a FIBA 3x3 World Cup 2019 gold medal winner.

No Flight KLM, no worries! Riga Ghetto have amazingly not missed Karlis Lasmanis because Nauris Miezis has become the new Caped Crusader. The world No.1 player is almost unstoppable right now.

But other players have stepped up, most notably sharpshooter Edgars Krumins who has been granted a license to fire away from two-land.

The No.1 seeds were the best team on the World Tour with three Masters titles. It's a golden chance to cap off a brilliant season and avenge last year's bitter loss in the final to Novi Sad.

The Lithuanians have spiced up the World Tour this season. The one-two punch of Marijus Uzupis and Aurelijus Pukelis has been beautiful to watch – unless you're trying to defend it. They might be the best duo of them all.

The basketball powerhouse have finally made a mark in 3x3 and the rest of the world should be worried.

Why can Zemun stun the field and win the World Tour Final? Because they've done it before. Just two years ago in the most insane fashion possible.