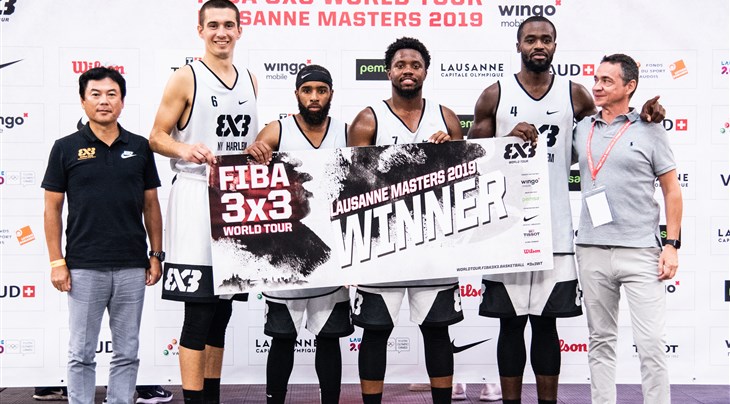 The New Yorkers became the first U.S. team to win a Masters since Chicago won the Americas Masters in Mexico City nearly 3 years ago, on September 23, 2016.

In an all-American final, NY Harlem dominated their rivals from Princeton. Dominique Jones caught fire in the championship game. He scored 10 points on 6/10 shooting and was perfect from the line on his signature one-handed free-throws. The man known as 'Disco Domo' topped all scorers in Lausanne with 35 points and took home the MVP award.

NY Harlem's first-ever World Tour title did not come without its share of sweat. The team from Big Apple won their first 3 games in the closing seconds on a Tissot Buzzer Beater. The team took home the 30,000 USD winning cheque. Prize money reached an all-time high 2 million USD on the FIBA 3x3 professional circuit in 2019.

Three weeks after Prague, it is the second time this season that Princeton lose in the championship game at a Masters. Former NBA player and World Cup 2019 MVP Robbie Hummel led his team in scoring and finished 3rd overall with 29 points.

The event was set in the heart of the Olympic Capital and was sold out for 3 of the 4 sessions.