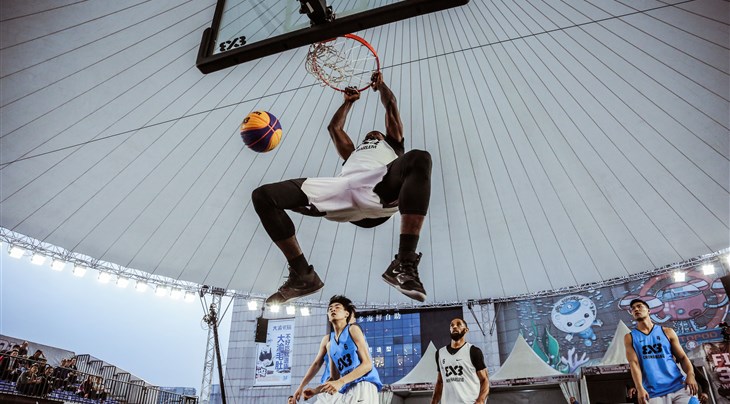 It's not just that the Americans won both games in Pool D on Saturday (20-16 vs Amsterdam (NED) and 21-9 vs Chongming YM (CHN)). That latter game was the second fastest game on the entire World Tour this season (just 3 seconds longer... than another NY Harlem win, against San Juan (PUR) at the Montreal Masters). Team captain Disco Domo Jones had a heat check in the first game against Amsterdam (14 points, best scoring performance of the day). His teammate Kidani Brutus did his best impression in the second game (13 points including a boiling hot 5/7 from outside the arc). Oh and Marcel Esonwune dominated our Instagram account with a day-high 14 rebounds, 4 blocks and 3 dunks, including that monster alley-oop.

The number 1 team in the world Novi Sad (SRB) was the only one to win both games before the limit. With 19 points overall, 3x3 superstar Dusan Bulut took the lead in the scoring charts. With Tamas Ivosev out, Marko Zdero made his return to the World Tour and brought his signature suffocating defense.

Liman (SRB) had a perfect day as well, despite opening the tournament against a dangerous Edmonton (CAN) team, who finished second at the Montreal Masters. But Stefan Kojic paced the Serbian powerhouse with 7 points and 3 key assists. The number 2 team in the world finished the job versus Shanghai SSLC (CHN) (21-16).

The only upset on Day 1 came courtesy of the team on the rise, Sakiai Gulbele (LTU), who defeated a Lasmanis-less Riga Ghetto (LAT) in the 3rd game of the day. Montreal Masters MVP Marijus Uzupis dominated this game witj 9 points and 8 rebounds. Both teams punched their ticket to the quarter-finals against a good New York City (USA) team, who was making its World Tour debut in China.