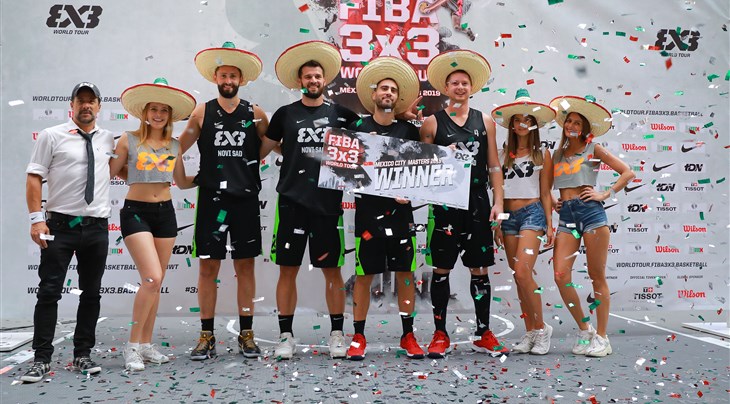 MEXICO CITY (Mexico) – Novi Sad (SRB) had one of the most impressive performances in World Tour history as they went 5-0, including a 21-11 against NY Harlem (USA) in the final, at the FIBA 3x3 World Tour Mexico City Masters on July 6-7, 2019.

One month after Chengdu, Novi Sad won their second Masters of the season. The number one team in the world seemed like they had an early flight to catch: they won all 5 games before the 10-minute limit. Even more impressive:their most difficult success was an 8-point landslide!

For its first-ever title in Mexico City, Novi Sad star Dusan Bulut was just unstoppable. 'Mr Bullutproof' was named MVP after scoring a tournament-high 47 points in 5 games. To give some perspective, if baskets were 2s and 3s like in basketball, the number 1 player in the world would have scored 75 points in around 35 minutes.

It was a bittersweet ending for NY Harlem , who lost their third final in Mexico City. After beating the 2nd and 3rd team in the world earlier in the tournament, the New Yorkers hit a wall in the final. Their leader Dominique Jones aka 'Disco Domo' - who finished 2nd overall in scoring - was held to just 3 points in the final.

With this win, Novi Sad also take the lead in the World Tour standings with 270 points, ahead of Riga Ghetto (LAT) and Liman (SRB).

In the individual contests, recent FIBA 3x3 World Cup MVP Robbie Hummel (Princeton, USA) caught fire in the shoot-out contest with 15 points from a possible 21. Another American stole the spotlight in the dunk contest,. Jordan Southerland had a couple of perfect scores with some never-seen-before dunks, including a 360 jam switching hands in mid-air.