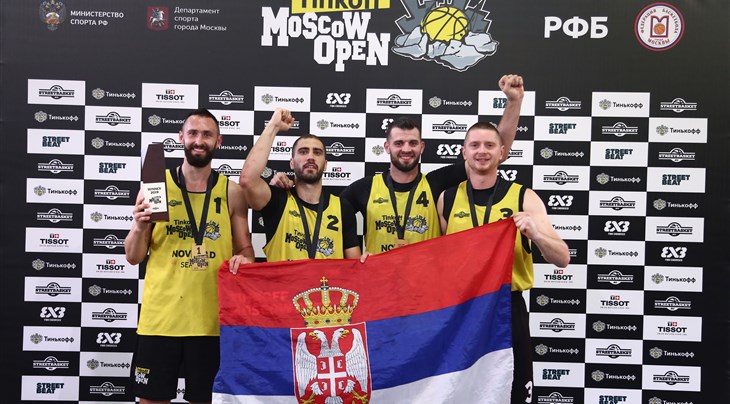 MOSCOW (Russia) – Novi Sad (SRB) won their 4th event in a row, though Princeton (USA) made them sweat in the final of the Tinkoff Moscow 3x3 Challenger on June 7-8, 2019.

First there was the Penang Challenger, then came the Novi Sad Challenger and the Chengdu Masters: Novi Sad have now won their last 4 events and secured their rank as the number one 3x3 team in the world. They suffered twice in Moscow: first in a scrappy 15-13 win in the quarter-finals against rivals Moscow Inanomo (RUS) and second in a thrilling 21-19 final against Princeton (USA). Novi Sad saw the return of their leader Dusan Bulut, who had the best pass of the tournament (the year so far?).

Who else in this world can do a sick ridiculous pass like that? 😱🤯🔥@dusan.bulut #3x3WT

Marko Savic led all players in key assists and highlights, Dejan Majstorovic finished 4th overall in scoring but it was Tamas Ivosev who won MVP in Moscow after ranking 3rd overall in points, 2nd in rebounds and 1st in blocks.

Princeton did not get off to a good start in Moscow, losing their opener against a young Ventspils Ghetto (LAT) team... who in the end went all the way to the semi-finals. But after that, they upped their game and had one of the best wins of their season against Riga Ghetto (LAT) in the quarter-finals on a Dan Mavraides game-winner, very reminiscent of Kawhi Leonard's series-winner against the Sixers.

The US team shot the ball extremely well in Russia. They led the event in both 2-points made and 2-point percentage. Princeton owed it a lot to shooting machine Craig Moore, who shot an insane 14/26 from behind the arc. The rest of the team shot 10/34. With Zahir Carrington, they also went 1,2,3,4 and 5 in the Top 5 Plays of the Tournament.

The final was probably the best game of the tournament, a fast-paced game which had Princeton up 9-7 after just 3 minutes. The 2 teams shot the ball extremely well. Novi Sad only missed 8 shots the entire game (17/25). Eight of their 13 shots inside the arc were assisted. Speaking of passes, Bulut's crazy pass to an Ivosev 2-pointer helped tie the game. Novi Sad continued a good run and took a commanding 14-11 lead. Princeton responded with a 5-0 run, punctuated by a big 2 from Damon Huffman over Ivosev. Craig Moore buried his 3rd two of the final to give Princeton a 19-17 win and the US team had 5 chances to win the game but the shots stopped falling and the Serbian defense became suffocating. The impeccable 3x3 game of Novi Sad was on full display on the last possession. Bulut stole the ball, found Ivosev behind the arc, who immediately connected with Majstorovic on a perfect backdoor pass for the easy reverse layup.

Key Stats:
- The team from the Philippines Balanga Chooks was involved in the Fastest Game of the Tournament, a 21-9 victory over Odessa (UKR) in the qualifying draw.
- Remember this name: Armands Ginters. One year after making the FIBA 3x3 U23 World Cup Team of the Tournament, the Latvian rising star topped all scorers by a landslide for his team Ventspils Ghetto, who went all the way to the semi-finals.
- Craig Moore was on a 2-day heat-check in Moscow. The Princeton sharpshooter buried twice as many 2-pointers as the 2nd in the category. More importantly: he shot at a crazy 54% clip (14-26), in outdoor conditions, playing against some of the best defenses on the pro circuit.
- Marko Savic was one of just 5 players who had more highlights than points scored. The Serbian surgeon had an event-best 19 highlights, including the #1 mark in key assists (12).