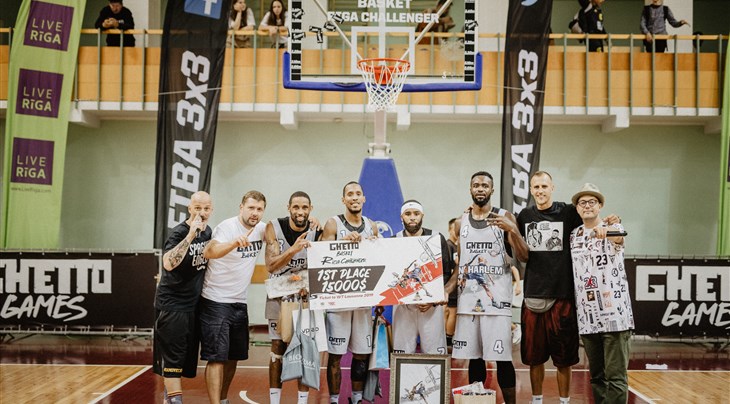 RIGA (Latvia) - NY Harlem have now won 3 Challengers this season after a last-second win against Šakiai Gulbelė (LTU) in the final of the Ghetto Basket 3x3 Riga Challenger on August 7-8, 2019.

They're the team on the rise this season. Just 2 weeks after Huaian, NY Harlem won their 2nd consecutive challenger (and 3rd overall after Limassol). Back on the team after leading USA to gold at the Pan-American Games, Dominique Jones aka 'Disco Domo' was on another level in Latvia.

The tournament MVP scored 43 points overall, 10 more than the 2nd in the scoring charts. The pocket-size Jones also topped the event in 2-points made (15 at a good 35% clip) and key assists (11). NY Harlem was the number one offense in Riga (19.6 ppg) and closed down the paint as the event leaders in blocks (13) and rebounds (119).

Speaking of teams on the rise, Šakiai Gulbelė are also on a streak. Four weeks after winning the Raudondvaris Challenger, the Lithuanians secured their 2nd trip to a World Tour Masters this season (they will play in Montreal too). The team finished 1st in 2 points made, 2nd in points and rebounds. Their top scorer 26-year-old Marijus Uzupis hit a big shot to beat Ralja Intergalatic (SRB) in the semi-finals. Their big guy Aurelijus Pukelis is strong (2nd in rebounds) but also has soft hands (70% shooting from inside the arc, 100% from the line).

FAST AND FURIOUS: Marijus Uzupis's shot to send Sakiai 🇱🇹 to the Lausanne Masters was released in just 0.71 sec (faster than Klay Thompson on average) and with a flat angle of 41 degrees (Steph Curry's 46). Stats measured with a smart @WilsonBasktball powered by SportIQ #3x3WT pic.twitter.com/LlqCliEtMy

After a slow start (3-3 after 3 minutes), both teams switched gears and scored 4 times more points in the next 3 minutes (tied at 15 after 6 minutes). NY Harlem built a small lead (11-7) but Sakiai came back with a few consecutive bombs from behind the arc, including a lucky 2 off the glass at the end of the 12 seconds from big man Pukelis. The last minute was absolutely nuts.

The Lithuanians took an option for the win after Uzupis gave them a 20-18 lead but Disco Domo buried his 4th two-pointer and 13th point to tie things up at 20-20. On the next play, Marcel Esonwune stripped Uzupis, Disco Domo drove to the rim, missed the floater but Antoinne Morgano grabbed the offensive rebound and scored on the put back, finishing the 3rd fastest game of the Challenger and 1 of the best games of the season.

- How dominant was Marcel Ensonwune (NY Harlem) under the rim? He led all players in rebounds (37) and blocks (11).

- Interestingly enough: both finalists dropped 1 game in the pool phase (NY Harlem vs Sosnovy Bor (RUS) and Sakiai vs Riga Ghetto (LAT)
- In that last game, Karlis Lasmanis had a monster triple-five (11 points, 7 rebounds and 7 highlights).

Not to mention 3 Dunks, 1 Buzzer-Beater and 2 in-your-face 2-pointers with an average release time of 0.72 seconds, measured with a smart @WilsonBasktball powered by SportIQ pic.twitter.com/scqbLPmWEk

- Riga only won 2 games over the weekend... both on a buzzer-beater.