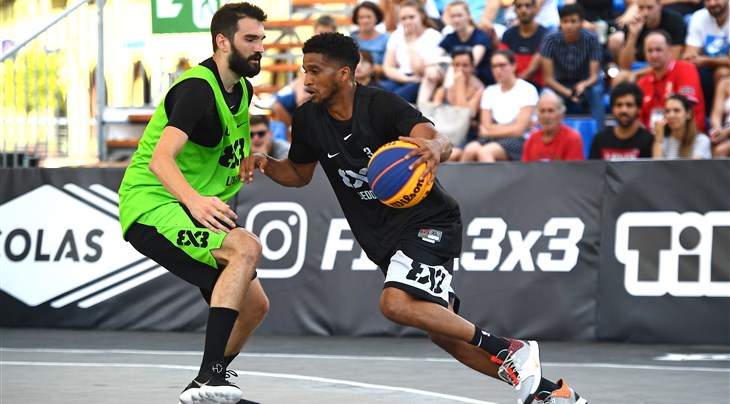 DEBRECEN (Hungary) - Jeddah went all the way from the qualifying draw to the quarter-finals on Day 1 at the FIBA 3x3 World Tour Debrecen Masters on August 27, 2019.

Jeddah won 4 games in 6 hours and proved they are the new team on the rise on the World Tour. First, they knocked out Lausanne (SUI) and Smed Palanka Armaggedon (SRB) in the qualifying draw.

Once in the main draw, the new-look squad shocked the #1 team in the standings Liman (SRB)and then eliminated Lausanne Masters runner-ups Princeton (USA).

He was chewing his jersey the whole play 😳 #3x3WT pic.twitter.com/1AkD9rXxXN

Jeddah's new target in the quarter-finals will be last year's Prague Masters runner-ups Gagarin, who upset Edmonton (CAN) to advance as second in Pool A. First were Novi Sad. The #1 team in the World finished undefeated in the group phase with two wins over the Russians (21-16) and the Canadians (19-15).

Second seed Riga Ghetto (LAT) had a tough start against new Serbian force Vrbas that was decided in overtime, where they prevailed 17-15. Day 1 top scorer Karlis Lasmanis buried the winning free-throw. And it's goodbye to local favorites Debrecen, who suffered back-to-back losses on Day 1.

Lausanne Masters winners NY Harlem extended their winning streak in Debrecen by defeating Piran (21-14) first and then taking over Nantes Aderim (21-15) in a remake of Lausanne's quarter-final. Surprisingly, Piran were eliminated after losing in overtime against Nantes following an ice-cold Tissot Buzzer Beater from Dominique Gentil aka "Mr. Nice".