Meet the new number one 3x3 women's player in the world, Laetitia Guapo 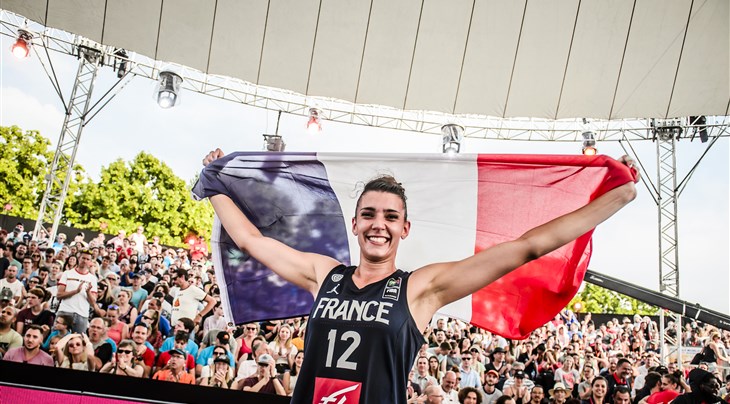 MACON (France) - The 23-year-old France star climbed on top of the rankings after helping France win the FIBA 3x3 Europe Cup in Debrecen, Hungary on September 1, 2019.

"After I learned I was number one," the 6ft (1.83m) sharpshooter said. "I immediately sent a screenshot to my dad. He was very happy and proud. He said he told me before all my efforts would pay off one day. I thought about all these times he made me run and how much I struggled with that."

As you could figure out by the name, Guapo's father is originally from Spain between Seville and the Portuguese border. It was her mom who put a basket in her hands. Her dad was a football fan who loved running and encouraged her to run as well. And Guapo became good at it, very good at it. She can run 10k in under 35 minutes, which is just 5 minutes away from the world record. Don'try this at home.

"Coach told me I was a player tailor-made for 3x3 because of my athletic and technical skills", the Clermont-Ferrand native added.

I would have never guessed this day would come, back in June when I started committing to 3x3."

Her first taste of 3x3 came in 2016-17 when she played for her university team and won the FISU 3x3 World University League. She won the title that year, playing alongside last year's FIBA 3x3 U23 Nations League MVP Caroline Hériaud. In 2017, she was then called up to play for the senior national team but had to decline as she was preparing for her exam to become a physical education teacher.

"As a matter of fact, [teammates] Marie-Eve Paget and Migna Touré are also PE teachers," Guapo points out. "In 3x3 or in basketball, there's hardly anyone with this kind of education. We are 3 of the very few with a situation for our post-career. It requires a lot of sacrifices and mental toughness to get there on top of basketball."

France won 5 FIBA 3x3 Women's Series titles this season and medals at the Europe Cup (gold) and World Cup (bronze). Their individual talent surely had a lot to do with this but their chemistry made a big difference.

"Ana [Filip] is the only player on the team I only knew by name. By coincidence, I played basketball in Vichy with Marie-Eve [Paget] at the age of 12 and later joined Migna [Touré] when I joined INSEP in Paris at 15. I played with MEP again in Nice for my first year in the pros. Our paths keep on crossing and from a human perspective, knowing them definitely helped with my integration."

I remember every Women's Series. I get nostalgic just thinking about it.”

Initially in a position battle with former number 1 player in the world Alice Nayo, Guapo managed to make herself indispensable. She now ranks 1st in two points made, 3rd in drives, 4th in blocks and rebounds and 5th overall in scoring on the season at the Women's Series.

"I remember every Women's Series," the French sniper said. "It's mental what we lived together. I'm getting nostalgic, just thinking about it. I'm happy that we're winning everything and it's really thanks to the girls that I'm here. It was a real surprise: I would have never guessed this day would come, back in June when I started committing to 3x3."

Interestingly, all 6 members of the French roster at the Women's Series once ranked number 1 in the world (in chronological order: Alice Nayo, Caroline Hériaud, Marie-Eve Paget, Migna Touré and lastly Ana Maria Filip). Guapo holds a minuscule 60-point lead over Touré, which means first place could very well change after the Udine Stop this weekend (where both Guapo and Touré compete).