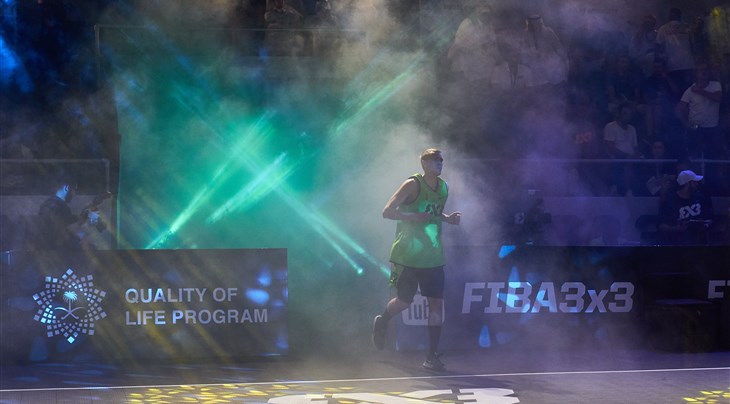 UTSUNOMIYA (Japan) - Riga Ghetto (LAT) and Edmonton (CAN) - winners of the past two Masters events - clash in a blockbuster opening at the Utsunomiya Final on November 2-3, 2019.

The wait for the 3x3 World Tour's biggest prize is nearly over and anticipation is building after the seedings were announced. After an incredible World Tour, where they won three Masters including in Jeddah last week, Riga Ghetto are the No.1 seeds and headline Pool A.

The Latvians will be once again without injured superstar Karlis Lasmanis but it didn't matter in Jeddah with sidekick and new world No.1 player Nauris Miezis becoming Riga Ghetto's superhero and winning MVP honors.

It was an impressive bounce back after losing to Edmonton in the semi-finals at the Nanjing Masters.

The rivalry will be renewed in Utsunomiya with Edmonton looking to continue their momentum after winning a maiden Masters title in Nanjing. The No.8 seeds will be led by sharpshooter Steve Sir who confirmed his billing as one of 3x3's best with an MVP winning performance in China.

It will be the fourth time the teams have met this season with Riga Ghetto having won the opening two contests before Nanjing. Amsterdam (NED) round out Pool A and have fared reasonably well against Edmonton splitting four games and won their only game against Riga Ghetto this season.

Defending champions Novi Sad (SRB) headline Pool B and face a tough early test against confident Princeton (USA). The No.2 seeds have been challenged by a tougher field on the World Tour this year and failed to win a Masters in their last five attempts.

Novi Sad will be at full strength and led by Dusan Bulut aka Mr Bullutproof who is set to again perform his magic tricks on the biggest stage of them all.

They will be looking for revenge against Princeton after losing in the semi-finals of the Los Angeles Masters last month. Games between Novi Sad and Princeton always deliver with the teams splitting their six games overall.

Los Angeles Masters champions Princeton will be at their mighty best and led by Robbie Hummel, who won the MVP at the FIBA 3x3 World Cup 2019.

Last but not least, Zemun (SRB) will be confident of an upset having memorably won the 2017 Final in Beijing in incredible fashion against Novi Sad.

But they have only won one of four games against their compatriots this season, including losing the quarter-finals of the Los Angeles Masters.

They had better success against Princeton winning both games this season.

No.3 seeds Liman (SRB) are the team to beat in Pool C after a rock solid Masters campaign where they were the only team to play in all 11 events.

The Serbs have done remarkably well without superstar Stefan Stojacic for most of the season with Mihailo Vasic picking up the scoring slack to be the World Tour's leading scorer.

Liman will be confident against their competitors from Pool C. They have a 6-1 record over the past two seasons against Saskatoon Masters winners Piran (SLO), including winning the semi-finals in Jeddah.

Liman have a perfect 4-0 record against No.11 Lausanne TNV (SUI). who only just made the cut to Utsunomiya.

In Pool D, No.4 seeds NY Harlem (USA) and No.5 Sakiai Gulbele (LTU) meet in a battle of 3x3's newest powerhouses. The teams have split four games this season and another classic is expected in Utsunomiya.

The Lausanne Masters champions will be led by scoring machines Dominique Jones aka Disco Domo and Kidani Brutus, while the Montreal Masters winners have dynamic duo Marijus Uzupis and Aurelijus Pukelis.

No.12 seeds Jeddah (KSA) are the third team in the group and deserve their spot in Utsunomiya after a strong backend of the season. The most spectacular player of the Debrecen Masters Khalid Abdel-Gabar leads a team, which will make its first appearance at the World Tour Final (the other newcomers: Pool D opponents Sakiai Gulbele ).