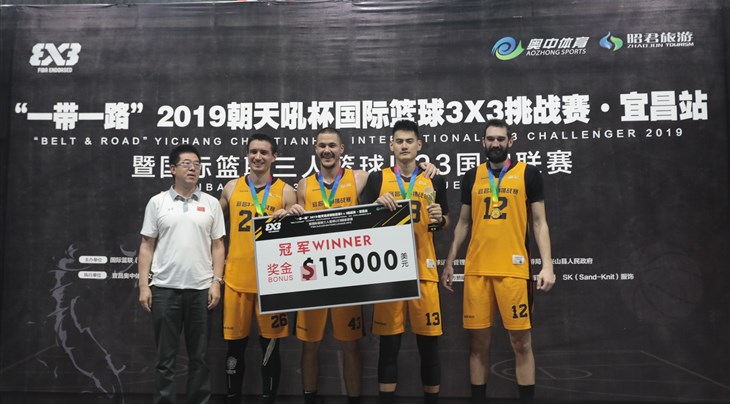 YICHANG (China) - Liman (SRB) won their third Challenger of the season by beating Gagarin (RUS) in final of the Yichang Challenger on July 13-14 2019.

Here's how it happened:

Liman did not drop a single game in this Challenger. After being injured for the first part the season, Liman star player and World Tour 2018 Top Scorer Stefan Stojačić aka Mr. Robot was still finding his offense form. In the meantime, he did work on the boards, finishing top overall in the tournament with a total of 29. When Mr. Robot couldn't find the rack, teammates Mihailo Vasic, Stefan Kojic and newbie Peng Yan filled in the gaps. Vasic would finish the tournament as the second highest scorer with 32 points.

When the rim is your best friend 😂@Liman3x3 #3x3WT pic.twitter.com/ypPpC8nF0O

Gagarin (RUS) were looking for their first win on the professional circuit in 2019. Nobody seemed more determined than U23 World Cup 2018 MVP Alexander Zuev, who led the way with some outrageous offense. He scored 10 out of 21 points in the pool game against Tokyo Dime (JPN) and led the way in scoring for the entire tournament with 36 points.

The final was close throughout with each team answering the other in offense. The game's largest difference was three points. Liman seemed to have the slight edge when Kojic hit a big 2 with 5 minutes left to go in the game. But Russian Sniper Zuev later responded to tie the game at 16-16. Mr. Robot answered right back making the score 18-16. From then on, the Serbians maintained the lead and sealed the deal with a basket by Vasic.

Key Stats
Anthony Chada did what Migna Touré did last week at the Women's Series: score 2 buzzer beaters in the same game. By the way, he scored 12 points in this 22-20 win over Korolev (RUS).

Anthony Chada 🇧🇪 has ❄ in his veins! He forced OT and then called game from beyond the arc 😱🤯#3x3WT pic.twitter.com/cfOEhW4wYh

Talking about big individual performance, Tymell Murphy had 1 of the most impressive triple-fives of the season:11 points, 8 highlights and 7 rebounds in a surprise pool stage win against Ralja Intergalatic (SRB).
We said Stefan Stojacic is still trying to find his groove back. He found other ways to contribute by not only being the top rebounder but also the top passer in Yichang.