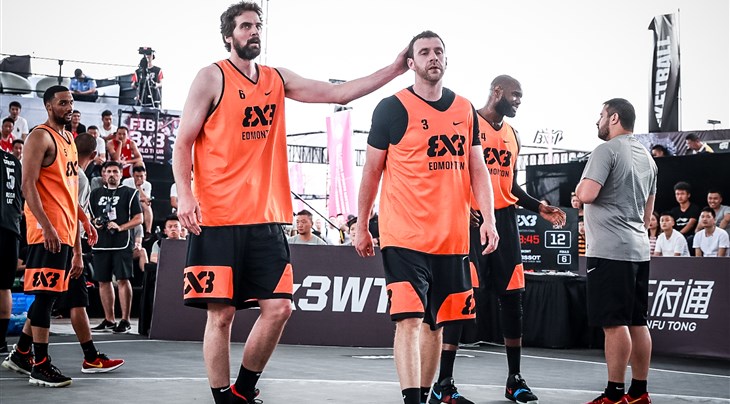 MEXICO CITY (Mexico) - In-form Liman (SRB) and rising power Edmonton (CAN) will square off in a mouth-watering pool clash in the third Masters of the season in Mexico City on July 6-7. All eyes will be on the Pool B blockbuster between No.2 seeds Liman and No.7 seeds Edmonton, who are an emerging force after impressive results in their debut season.

In their first ever Masters in last month’s event in Chengdu, Edmonton reached the quarter-finals only for their dream campaign to end in heartbreak against Riga Ghetto (LAT).

Liman will arrive in Mexico City in winning form after claiming the Haining 3x3 Challenger. A semi-finalist in Chengdu, Liman have since been boosted by the return of star Stefan Stojacic who has slowly worked his way back after a lengthy stint on the sidelines due to a calf injury.

Sao Paulo DC (BRA) round out Pool B and could well push their fancied opponents, particularly if star Luiz Soriani fires.

World No.1 Novi Sad (SRB) headline Pool A and have their first-choice line-up after Dusan Bulut missed out on the team’s triumph in Chengdu. Dejan Majstorovic stepped up and claimed the MVP and has been arguably the hottest player on the circuit this season.

Novi Sad will be pitted against 8th seeds The Hague (NED) and 9th seeds Campinas (BRA).

Third seeds Riga Ghetto (LAT) will be the team to beat in Pool C as they seek to continue their brilliant Masters form this season. After winning a historic Doha Masters title, Riga Ghetto almost made it consecutive victories in Chengdu but fell agonizingly short and finished runners-up.

The Latvians are favored in the pool, which also features Oliva (ARG), but they face a tough early challenge against confident NY Harlem (USA), who won the Limassol Challenger last month.

Having also finished second at the Novi Sad Challenger in May, the sixth seeds loom as a dark horse particularly if Dominique Jones aka Disco Domo can ignite the team with his fancy footwork and lethal shooting.

Pool D will see 4th seeds Amsterdam (NED) and 5th seeds Princeton (USA) resuming their rivalry after the Americans won a thrilling encounter in Chengdu. But it was the Dutch who went further as they reached the semi-finals before falling to Novi Sad. Dimeo van der Horst starred in Chengdu and will be pivotal to the team’s success in Mexico.

Princeton will be inspired by the inclusion of Robbie Hummel, who was the MVP of the FIBA 3x3 World Cup as he led USA to a historic title. He is joined by Gold Medal winning teammate Damon Huffman but high-flyer Kareem Maddox will not be shaking rims in Mexico City. Don't worry too much about our Top 5 videos though as the human highlight reel Zahir Carrington will suit up for Princeton.

Local favorites Mexico City Ruido Qro (MEX) round out Pool D and will be hoping to produce upsets for their passionate fans.

The 12 participating teams compete for USD $75,000 and points to climb up the World Tour standings. Unlike last year, the Masters winners do not qualify directly to the World Tour Final. The top 12 teams in the standings after the last Masters will head to Utsunomiya, Japan where the final will be played on November 2-3.