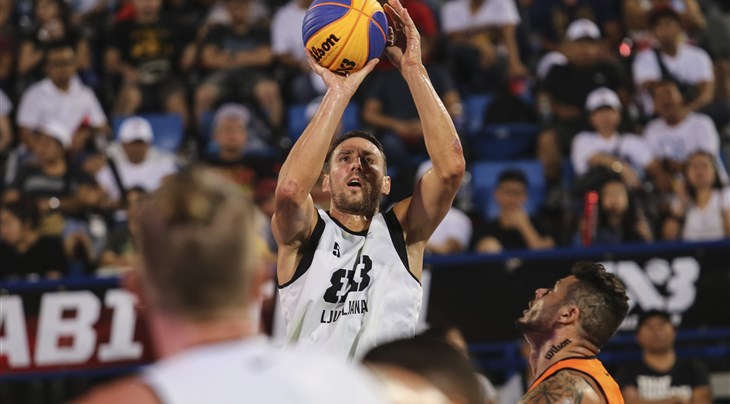 JEDDAH (Saudi Arabia) - Passionately encouraging his team from the sidelines, Ales Kunc still has the fire for 3x3 well after his playing days.

The Slovenian achieved everything in his decorated career including being a key part of Ljubljana's 2013 and 2016 FIBA 3x3 World Tour titles. Since he stopped playing, Kunc has made a successful transition as a manager and played a major role in Jeddah's spectacular rise up the rankings this season. Kunc immediately felt a connection to the Saudi Arabian team. "When they called, I knew it was for me," he says. "I did a lot of the things - what we did in Ljubljana - here."

He only stepped away from playing a couple of years ago but Kunc has noticed the jump in professionalism in 3x3 with teams requiring more support off the court. "There is a demand for extra help," he says. "When players finish practice and are tired, they don’t want to sit two hours and watch video and study how to play some team they don’t know. That’s one thing I can do now."

Kunc has enjoyed instilling discipline and a strong work ethic in Jeddah's team.
"There are days when players are a bit tired and on those days it is the coach that is going to push them to work hard," he says. "It is important for the players to go out on the court in a comfortable zone."

With 3x3 constantly evolving and tactics becoming a key part of the game, Kunc has had to develop his coaching principles. "I definitely adjusted some of the things that I was doing in the past," he says. "With Ljubljana we never had the opportunity to practice but now everyone is professional.

"I'm more nervous sitting in the stands and watching how the game goes than I was playing on the court."

Inspired by Kunc's wise words, surprise packets Jeddah qualified for the Utsunomiya Final after a strong backend to the season highlighted by a semi-final finish at the Debrecen Masters. The success can be attributed to the team's tight bond.

"I look for a good personality in a player," Kunc says. "I feel very proud what the team has done. I see their progress and how they are getting better every day.

"We have become a family and we are going to stay connected until the end of our lives."