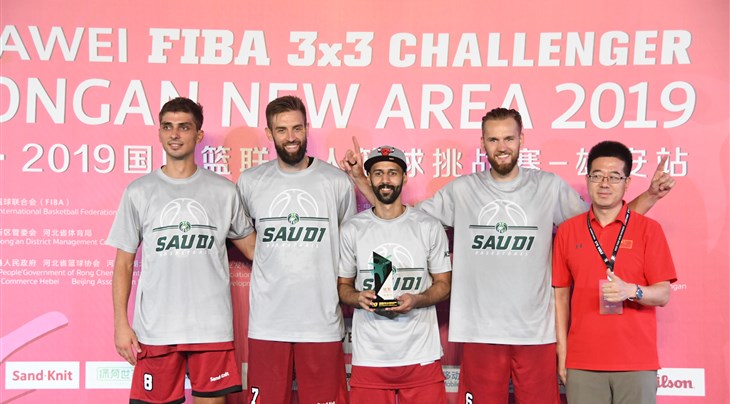 It only took 3 attempts for Jeddah to win their first professional 3x3 event. Just a week after finishing 3rd in Ljubljana, Szymon Rduch and co secured their 2nd ticket to a Masters.

The team defeated local favorites Beijing in the quarter-finals and red hot Vrbas (SRB) in the semi-finals. They finished in style with the W over Amsterdam.

The Dutch squad bounced back after a couple of disappointing tournaments to reach the final in Xiong An.

Sjoerd van Vilsteren and Jesse Markusse were key in Amsterdam's defense with 31 and 26 rebounds respectively.

As the score reflects, it wasn't a walk in the park for Jeddah (KSA), who suffered until the last second to clinch the win in China.

Szymon Rduch was a force for the Saudi team with 7 points, finishing as top scorer of the final - and 5th of the event - Kevin Corre also contributed with 4pts in the championship game.

For Amsterdam, Aaron Roijé and Dimeo van der Horst chipped in 6 points each, not enough to defeat Jeddah though.

Jeddah and Amsterdam join the #1 team in the World Novi Sad, Liman, Princeton, Zemun and Gagarin in the ninth stop on this season’s FIBA 3x3 World Tour.

- Vrbas (SRB) vs Humpolec Bernard (CZE) was the fastest game of the event with only 5'52" of playing time.
- Ljubljana (SLO) were perfect from the free-throw line (100%)
- The Hague (NED) had a dunk party with a total of 6 in the event.
- Strahinja Stojacic (Vrbas) was a highlight reel with a total of 26.