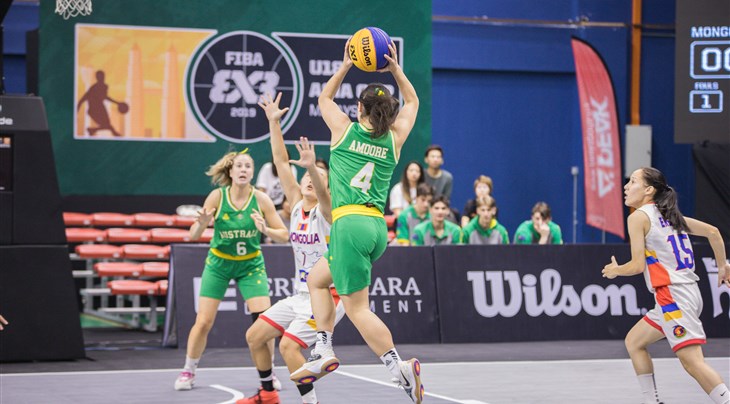 In Pool A, No.10 seeds Japan made a major statement with a 21-9 thrashing of No.1 seeds China. Seventeen-year-old star Seishin Yokochi was unstoppable early as he continually drove to the rim in an overpowering performance.

But it wasn’t a one-man show with Japan firing on all cylinders and were particularly dangerous from downtown. Keijiro Mitani, fittingly, ended it with a splash as Japan defeated their rivals in a repeat of a similar upset result from last year’s event.

It capped a brilliant opening day for Japan, who started with an easy 21-8 thrashing of hosts Malaysia. Yokochi silenced the home fans with trademark drives but he also showcased his range with a couple of makes from deep to finish with an equal game-high 6 points.

China qualified out of Pool A after beating Malaysia 21-15 in a tight contest.

In Pool B, No.2 seeds Mongolia and New Zealand played it out for top spot after both recorded convincing victories over Sri Lanka.New Zealand’s big bodies and physical approach caused problems for Mongolia, who rely on finesse and long-range shooting.

New Zealand appeared set for a comfortable victory leading 14-10 with under a minute left before Mongolia caught fire and hit three shots from deep to take the lead. But foul trouble haunted them and New Zealand prevailed 19-17 to top Pool B.

In the women’s, Australia strengthened their championship credentials with two convincing victories highlighted by a commanding 14-5 victory over No.2 seeds Mongolia. Australia smothered Mongolia on defense and had an array of options on offense.

No.7 seeds Australia earlier thrashed Kazakhstan 21-6 in a scintillating display. Georgia Amoore was outstanding with 8 points against a weary Kazakhstan, who suffered a heartbreaking 18-15 defeat to Mongolia earlier on Day 1.

In Pool A, reigning champions China were pushed in both their games. A gallant Malaysia were inspired in front of their home fans and scores were close throughout.

Malaysia looked a genuine chance of causing a huge upset but China’s class prevailed. Yingjie Chen dominated inside with 8 points to lead China to a 15-9 victory.

China survived another scare against No.8 seeds the Philippines. It was a see-sawing game but a tough layup and subsequent free-throw from Mao Zhang snuffed out the challenge. Zhang drained buckets all over the court to finish with a game-high 9 points as China edged out the Philippines 16-14.

The Philippines qualified from Pool A after beating Malaysia 19-8 in the last game of the day.

Day 2 will see action from Pool C and D.