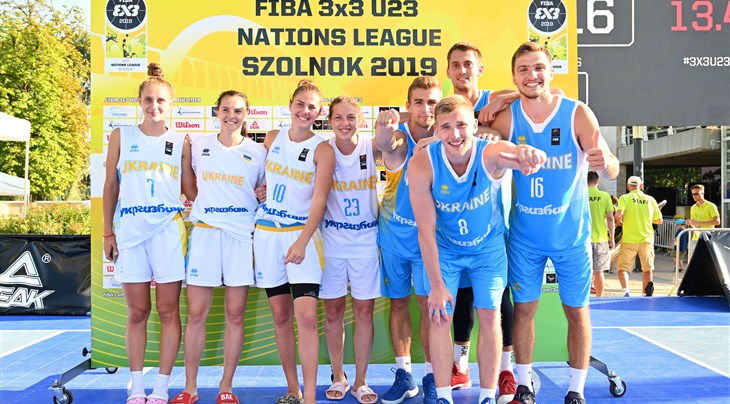 SZOLNOK (Hungary) – Ukraine’s bid to qualify for the FIBA 3x3 U23 Nations League 2019 Final remains on track after strong performances at two stops in Szolnok on August 2 and 4.

The tournament features three conferences (Asia-Europe, Center-East Europe and West-South Europe) with the top two teams (in each gender) earning tickets to the final held in Budapest during the World Urban Games on September 13-15.

Czech Republic, Hungary, Poland, Romania, Slovakia and Ukraine are the teams competing in Center-East Europe. They play six stops to determinate who is the winner of the conference.

Coming into Hungary with a 30-point lead, Ukraine's men stretched their advantage after winning the fourth stop and beating Poland 21-16 in the final.

It was an important bounce back after Ukraine lost in the semi-finals of stop three to Romania.

Sometimes the best option is not playing defense 😉 #3x3U23 pic.twitter.com/XkGUCjK2qv

Hungary had closed the gap after winning stop three but they couldn’t back up and lost to Poland in the semi-finals in stop four.

In the women’s side of the conference, Ukraine also made a jump to the top after spectacular performances in Szolnok.

They easily defeated Czech Republic 21-14 in the final of stop three but their dream run ended when they lost the rematch to the Czechs in the stop four semi-final.

Hungary ensured the standings remain tight by beating the Czechs in the final of stop four. The Czechs also gained ground after two strong showings in Hungary. Both Russian squads, Belarus' men and China's women qualified out of Asia-Europe, while the Dutch and French teams in both genders made it out of West-South Europe.

The final two stops in Center-East Europe will be in Debrecen (Hungary) on August 29-30.