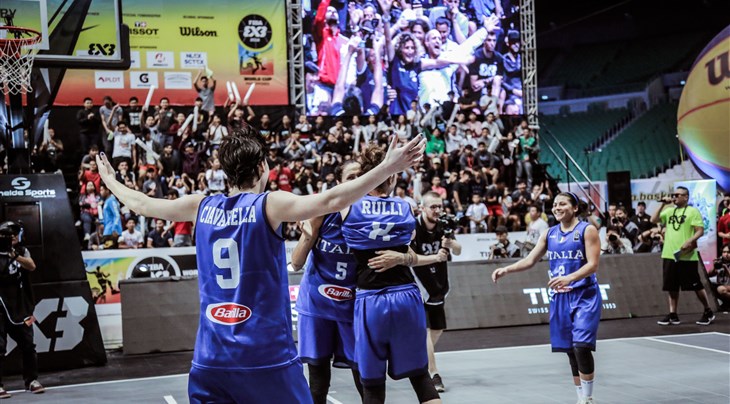 TURIN (Italy) – Hosts Italy will be looking for the perfect FIBA 3x3 World Cup preparation when they battle a strong line-up at the FIBA 3x3 Women’s Series in Turin on June 14 and 15.

Italy are the reigning world champions after glory last year in Manila and rode the hot form of MVP Rae Lin D’Alie, who will be showcasing her talents in front of the home fans in Turin.

Number two seeds Italy are the favorites to emerge from Pool B, which also features No.3 seeds Mongolia, Ireland and Serbia.

Pool A looms as a tight affair with number 1 seed France headlining the group and boasting the top two players in the world – Migna Touré, who was MVP of last year’s Europe Cup, and Marie-Eve Paget.

France will be looking to bounce back after finishing fifth in Chengdu earlier this month in the first-ever Women’s Series stop. They lost to eventual champions Australia in the pool stage before bowing out of the tournament in the quarter-finals after losing to Japan.

France face a tough test immediately against Canada in a blockbuster game to start the tournament. The No.8 seeds are a rising team and feature twin sisters Michelle and Katherine Plouffe, who have had national basketball success by winning gold at the 2015 Pan American Games and 2017 FIBA Women’s Americup.

Basketball powerhouse USA is the No.5 seed and gifted 19-year-old Christyn Williams will be their player to watch after starting every game at the University of Connecticut last year as a freshman. Williams also shone during USA’s triumph at FIBA 3x3 U18 World Cup 2017.

A little kid trapped in a big kids body😂😂😂😂

The USA had a disappointing performance in Chengdu with just one victory from four games to finish sixth.

No.4 seed Czech Republic round out Pool A and along with France, Italy and Mongolia will be playing at next week’s FIBA 3x3 World Cup in Amsterdam.

The new Women’s Series sees teams representing their national federation and 8-12 events are expected to take place this year. There are more than 8 teams participating at the Women's Series meaning that the teams are different at each event. They qualify for individual stops based on the number of events they have already been allocated to and their team ranking.