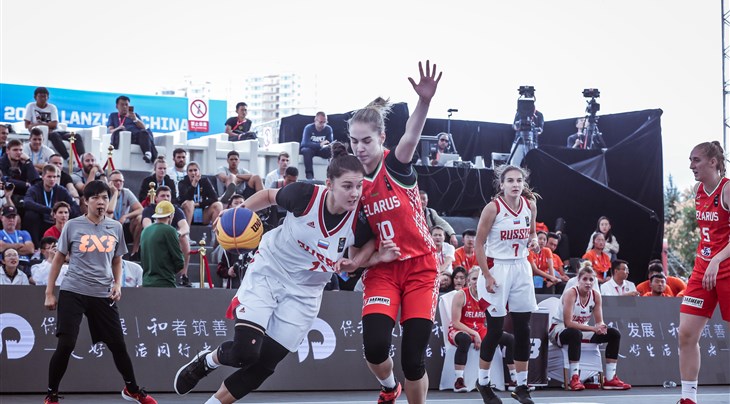 In the women's category, No.1 seeds Russia successfully started their title defense but were pushed by Belarus and the Czech Republic. The No.1 seeds needed a big game from Ekaterina Polyashova (7 points) to edge past Belarus 15-12 but were challenged even more by No.16 seeds Czech Republic.

They trailed from the get go and looked set for a surprising defeat when trailing 18-15. But a composed Russia scored the last six points to pull out a gritty comeback victory with star Olga Frolkina the hero with 10 points.

In Pool C, Romania stole the show with a perfect Day 2. After easily defeating Uganda, the No.6 seeds stunned No.3 seeds Mongolia in an overtime classic.

Tserenlkham Munkhsaikhan put the Mongolians ahead with a sweet reverse layup only for Alina-Maria Podar (12 points) to call game with the Tissot Buzzer Beater.

❄ICE IN HER VEINS❄

Romania defeats Mongolia in OT thanks on a @TISSOT Buzzer Beater pic.twitter.com/TTQC8YbmMS

There will be Pool B and D action on Day 3.

In the men's bracket, No.2 seeds China ensured the home fans made plenty of noise with comfortable victories over Romania (21-16) and Kazakhstan (21-9). Star Peng Yan was dominant against Romania with a game-high 8 points and then was a one-man highlight reel against Kazakhstan.

A spectacular Peng Yan block followed by a two-piece made the crowd party like it was China's National Day and he fittingly ended the game with another two-pointer.

Last year's silver medalist Latvia also impressed in Pool B with victories over Kazakhstan (21-15) and the USA (21-14).

Brazil flexed their muscles with victories over Italy (16-13) and Kyrgyzstan (20-14) to set the pace in Pool C. No.3 seeds Qatar continued to struggle after falling 17-14 to Italy and remaining winless.

The Netherlands and Serbia have taken Pool D by storm after strong showings. The Netherlands overcame South Korea 21-16 and then produced a vital 20-17 victory over No.4 seeds Mongolia.

Mack Bruining was unstoppable from deep and drained four shots from behind the arc to prove the Dutchman are a serious medal contender.

There will be men's games from Pool A and C on Day 3.