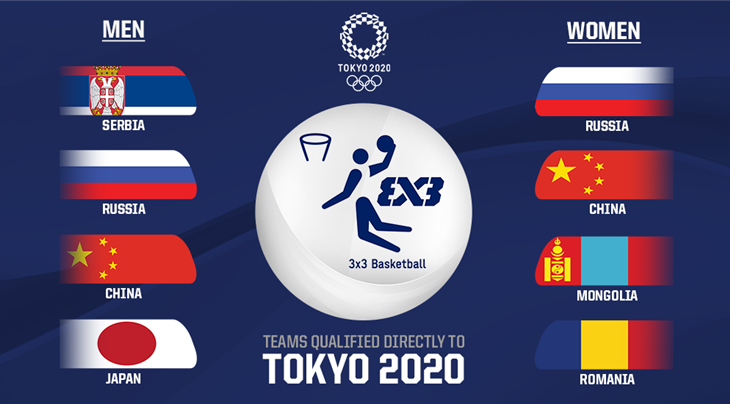 The top 4 teams in the FIBA 3x3 Federation Ranking in the women’s category (Russia, China, Mongolia and Romania) earned a trip to the Tokyo Olympics, where 3x3 will make its first appearance on July 25-29.

The top 3 teams in the FIBA 3x3 Ranking in the men’s category (Serbia, Russia and China) together with the Japanese hosts will join them in the Aomi Urban Sports Park in the waterfront Aomi district for the much-anticipated event.

The FIBA 3x3 Federation Ranking is calculated by adding up the FIBA 3x3 Individual World Ranking points of the Top 100 nationals. It not only rewards the elite performances of the players but also the 3x3 activity in the territory of each National Federation.

A total of 20 teams per gender can still make it to Tokyo after qualifying for the FIBA 3x3 Olympic Qualifying Tournament (OQT), which will grant 3 tickets to the Olympics by gender and take place in Graz, Austria on April 2021. The teams made it to the OQT due to being hosts (Austria and Japan’s women), thanks to their medal at the FIBA 3x3 World Cup 2019 or because they were the highest-ranked teams in the FIBA 3x3 Federation Ranking not yet qualified.

One of 3x3’s missions is to bring basketball to new countries, which are not traditional basketball powerhouses and FIBA has put in place a series of universality rules. A maximum of 10 teams per continent and a minimum of 30 different countries must take part at the Olympic Qualifying Tournament. In other words, only the top 6 teams qualified for the OQT based on ranking could have a team both in men and women (like France, the Netherlands, and USA ). The last 10 berths in each gender were allocated following the Federation Ranking list only if the respective country didn’t already have a team in any gender qualified.


The last ticket (per gender) to the 3x3 event of the Olympics will be awarded at the Universality Olympic Qualifying Tournament, which will feature these 6 teams and take place in Budapest, Hungary in May 2021. Besides the hosts (including the Olympic Games hosts Japan’s women if not yet qualified via the OQT), the other teams were the highest ranked teams not yet qualified to the Olympic Games, who have not been represented in Basketball (men or women) in the past 2 editions of the Olympic Games). This is another example of FIBA’s vision for 3x3 to bring 3x3 to new markets.

Media can download here a selection of photos, visuals and videos of the ceremony.