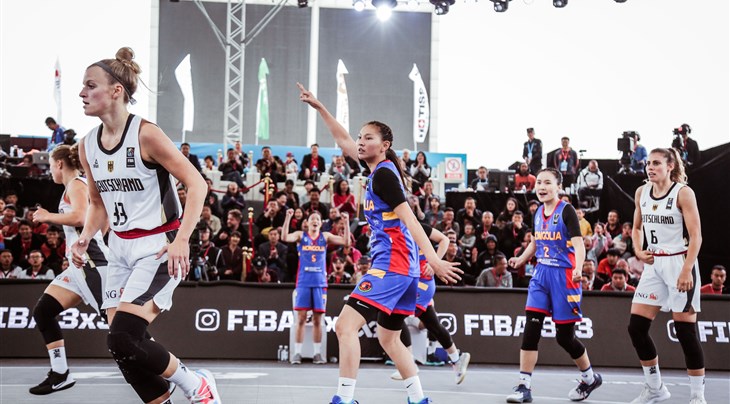 LANZHOU (China) – Mongolia qualified for the quarter-finals of the FIBA 3x3 U23 World Cup 2019 after producing two heart-stopping victories on Day 4.

It was a three-way battle off in Pool C between Mongolia, Germany and Romania. After a shaky start to the tournament, Mongolia needed a strong Day 4 and it came down to the wire against Germany until star Minjin Ganbat was deadlier than the Joker.

The No.3 seeds once again did it the hard way but booked their spot in the final eight with a tight 19-17 win over Uganda. Ganbat was again brilliant with a game-high 9 points.

It meant Germany's 21-9 thrashing over Romania booked them a spot out of Pool C.

Defending champions Russia dominated Indonesia (21-3) and Dominican Republic (22-7) to confirm their title favoritism. Evgeniia Frolkina was unstoppable from deep as the young star nailed seven two-pieces across the two games.

Belarus also made it out of Pool A after comfortably defeating Indonesia (20-13) and the Czech Republic (21-11).

In the men's draw, unbeaten Serbia topped Pool D after making quick work of South Korea (17-5) and then overcoming the Netherlands (15-13) in a hard-fought contest. Dusan Samardzic was a standout across the games scoring 14 points combined.

Even though they fell short against Serbia, the Netherlands booked a quarter-final berth after easily defeating Lithuania 21-12. Dynamo Dylan Van Eyck was a one-man excitement machine as he single-handedly matched Lithuania with a game-high 12 points.

In Pool B, hosts China ensured they finished the pool stage undefeated after easily beating Latvia (20-12) and winless USA (21-15).

Latvia qualified to the knockout stages with a 15-12 victory over Romania.