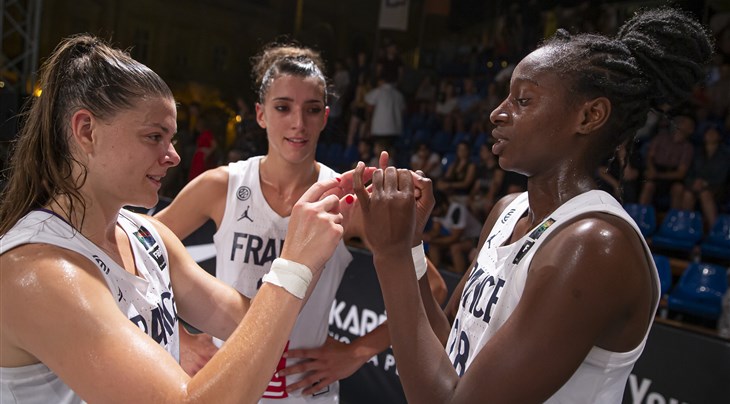 UDINE (Italy) - France have a unique chance to stretch their commanding lead on top of the FIBA 3x3 Women's Series at the Udine Stop on September 14-15, 2019.

France sit pretty on top of the standings but their big lead was reduced by red hot Canada who recently won their home event at the Montreal Stop. France lead by 160 points over Canada, who have won their last three stops but won't be playing in Udine.

This time they were pushed to the brink with Migna Touré nailing the Tissot Buzzer Beater in overtime.

A player to watch in Udine will be 23-year-old sensation Laetitia Guapo who dominated at the FIBA 3x3 Europe Cup and is now the No.1 ranked player in the world.

France's biggest challenge could be from hosts and No.2 seeds Italy, who are No.3 on the overall standings but struggled in Debrecen with a lowly seventh placed finish.

The FIBA 3x3 World Cup 2018 champions can never be discounted, Especially when they boast the dynamic Rae Lin D'Alie, who always raises her game in front of the home fans.

No.3 seeds Poland would also fancy their chances having had three top four placings at the Women's Series, highlighted by a runners-up finish at the Prague Stop.

The Netherlands round out the top four seeds but have struggled on the big stage ever since semi-finals appearances in Chengdu and Poitiers earlier in the competition. But armed with talented sisters Jill and Loyce Bettonvil, the Netherlands might just be able to rediscover their best form in Italy.

There will also be plenty of young talent on display through the U/23 teams from Italy and the Czech Republic.

This is the FIBA 3x3 Women's Series inaugural edition. The competition was launched to offer women a chance to play 3x3 at the highest level on a regular basis and represents a unique opportunity to bring new countries on the focus as well as for the best players to prepare and offer an amazing show at the Tokyo 2020 Olympic Games.