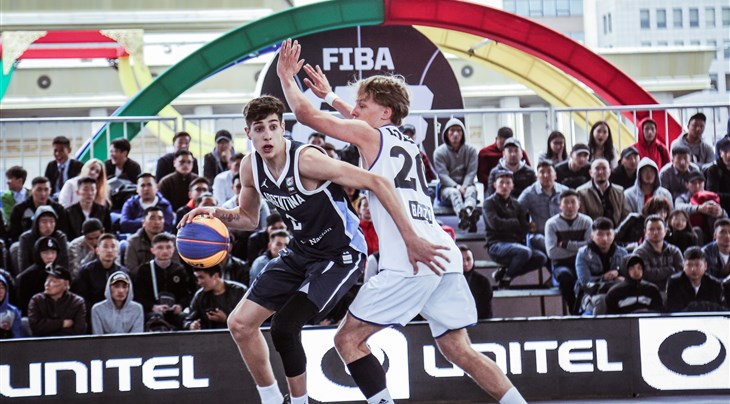 ULAANBAATAR (FIBA 3x3 U18 World Cup) – France (women) and Argentina (men) opened the U18 World Cup with strong statement victories on the first day of pool play in Mongolia on June 3, 2019.

France secured two victories to begin their 3x3 World Cup campaign proving too much for the Philippines (22-2) and Netherlands (15-2). Lisa Dufon, N’dye Mayé Touré and Mariama Daramy shared the offensive output as the French squad put a statement to the competition on the defensive side of the ball conceding just 4 points on the day.

Top-seeded China cruised to victory over Sri Lanka (21-5) and Mexico (17-9) with the hot shooting of Xianglin Wu (16 points) leading the team to a strong position atop Group A.

Brazil produced a dominant start to begin the action in Pool D with a strong victory over Kyrgyzstan (22-8) before clashing with Argentina who narrowly picked up victory over Estonia (17-20) to start their tournament. It was Argentina that came out on top in the South American clash to take the top spot in the pool after the first day of action.

Second seeded Russia showed their pedigree to top Group B after day one with powerful wins over Ukraine (21-16) and Kazakhstan (21-5) behind the strong play of Danila Chikarev who topped all scorers on the first day of action in Mongolia with 22 points across the two games.

Day 2 of the 3x3 U18 World Cup sees the USA Men and Women’s teams begin their tournament as well as Men’s number 1 seed’s China in play amongst a host of great action.