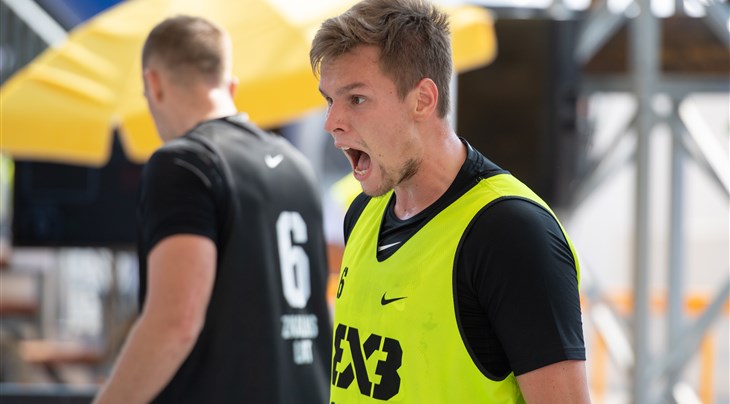 ST PETERSBURG (Russia) – Expect high-flying dunks, insane moves and a bucket load of entertainment during the finale of the inaugural United League Europe 3x3 as teams fight for a spot in the FIBA 3x3 World Tour opener in Doha.

The new professional league in Russia’s historical city started in January and has had four stops before the finale on April 4-5. The eight-team league has not only attracted some of the top 3x3 Russian teams, but also headliners such as Latvia’s Riga Ghetto and Team Netherlands.

United League Europe 3x3 executive director Alexander Fomin said it had been a successful debut for the league. “Fans have really gotten into the games because the standard has been high and entertaining,” he said.

“As the name of the league suggests, we are hoping to connect Europe and the plans for the future are for more teams from across Europe.”

Right now, there is plenty to play for in the final two days of action with a spot in the World Tour opener in Doha up for grabs.

Here are five things to know before the final stages start.

Gagarin the team to beat

Russian team Gagarin are in pole position to secure a Doha spot with 340 points to lead the standings.

Led by No.1 ranked Russian player Alexander Zuev, they have played consistently throughout after winning the second stage and they also have three second placed finishes.

Gagarin’s lead is slim with Riga Ghetto right behind on 320 points after finishing in the top three at every stage. A fan favorite everywhere they go, the Latvians are led by their own superhero Karlis Lasmanis who usually plays Batman. Without his sidekick Nauris Miezis out with an injury, Agnis Cavars needs to play Robin.

Not far behind is Russian team COP Rosenergoatom, who have 300 points and are full of confidence after winning the last stage. The ridiculous Vladislav Meleshkin has stolen the show during the tournament as he transforms into a 3x3 superstar.

World Tour Doha on the line

The race to Doha is led by Gagarin, Riga Ghetto and COP Rosenergoatom. The winner of a stage receives 100 points, second place 80 points and third place 70 points.

COP Rosenergoatom might be the outsider but they have all the momentum after thrillingly beating Gagarin 21-18 in the final of the last stage.

In typical 3x3 fashion, anything is possible. Any of the eight teams can win the finale.

“The games have been unpredictable and it’s very hard to predict a winner,” Fomin said. “It will be a war during these last two days.”

Meet 3x3’s hottest player, Vladislav Meleshkin. The 24-year-old has electrified the league with his insane play. He makes the ridiculous look easy. Think James Harden has mastered the step back?

Is @Vlad_Meleshkin the next 3x3 star coming out of Russia🇷🇺 ?

Wait till you see this Russian sensation break ankles and effortlessly step behind the arc to drain a dagger.

He also has the springs of a trampoline. Oh, and he can perform magic with the ball in his hands. He has lived up to expectations by being the leading scorer in the league so far.

Welcome to the hype, Vladislav Meleshkin.

Our main scorer , who will score, even if he is not shooting into the basket - Vlad Meleshkin from COP Rosenergoatom 👌🏻🔥

Highlights of the top scorer of 4th round , are ready for you to watch and click on repeat , look again and press repeat one more time 👇🏻🏀 ⠀@FIBA3x3 pic.twitter.com/X050XKQygW

You can already guess who will shake the rims the most over the next couple of days. This dude, Karlis Lasmanis, can walk on air and do things athletically that should not be humanly possible. Some poor defender always ends up on a meme.

Lasmanis is more than a dunking machine and will be determined to lead his team to top place and a spot in Doha. Whatever happens, Flight KLM will be worth catching.

Will it be young gun Meleshkin who is crowned as the league’s best player? Lasmanis? Zuev? How about towering Dutchman Hieronymus Van Der List?

This is going to be a fun race.