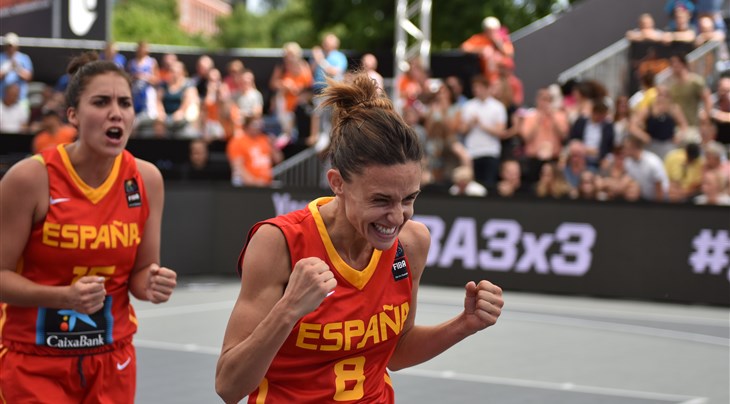 SAN JUAN (Puerto Rico) – Buenas everyone! It’s time to get down to business at the FIBA 3x3 World Cup Qualifier 2019 with the hopes of 16 men’s and women’s teams on the line.

It’s going to be epic, but let’s remind you of five reasons to tune in.

At 1, it all comes down to this weekend in one of the world’s most beautiful places. But it won’t be paradise in the Caribbean island - this is going to be intense! There are still six tickets for the FIBA 3x3 World Cup 2019 in Amsterdam – which will be the last World Cup before 3x3 goes Olympic.

Amsterdam will be the place where dreams are made and teams will play in the biggest outdoor venue in 3x3 history! Remember the medalists get a ticket to the Olympic Qualifying Tournament!!!

Firstly, teams are going to have to get through qualification and the star-studded field includes former World Cup medalists France (men) and Australia (women). The last 6 games will be intense: you win, you go to Amsterdam. Simple as that.

You thought fighting over Winterfell was crazy? Just wait until the Battle of San Juan.

How to make it from the #3x3WC Qualifier 🇵🇷 to the World Cup 🇳🇱? Glad you asked 👇 pic.twitter.com/ajD7cznKmr

At 2, hosts Puerto Rico are hoops-crazy. The home crowd is going to be louder than Coachella. And Puerto Rico means business on the court.

In the men’s, they are led by Luis 'Pela Coco' Hernandez who at 6ft 7in (2.01m) and 115kg makes opponents think he’s Thor with a uniform on. Then there is another superhero, Gilberto Clavell aka Goggle Man, whose superpower is also to put people on a poster.

And don’t forget about their women’s team. Pamela Rosado is a crowd-pleaser. Don't be stunned if the pass of the tournament comes from the women's category.

At 3, powerful Australia are the only country other than Puerto Rico with men’s and women’s teams here. Will they be the only nation that qualifies two teams to the World Cup in San Juan? Don’t rule them out.

Tom Wright leads from the front for this gritty men’s team. He’ll do all the little things and when it comes down to winning time – as his name suggests - Wright always makes the right play.

In the women’s, the number 1 player in the country Rebecca Cole is the most intense player in the world. Somebody put some milk and sugar in her 10th cup of coffee.

#Repost @3x3hustle 👊🏽🥇💰 ・・・ She is number one, and they are number one 1⃣ @rebeccajcole hits the game winner and @spectres.iathletic are the women's champs for the 2019 3x3 Pro Hustle Tour 🏆 #3x3Hustle

At 4, is it time for Africa to take 3x3 by storm? Jamila Nansikombi will make you believe. The Uganda star is only 22 but is already a veteran in our top highlight plays.

Then there is Mali – the two-time defending FIBA 3x3 Africa Cup champs. They have better chemistry than Bradley Cooper and Lady Gaga. You know they want to make a statement on the world stage.

At 5, Paula Palomares is not fair. She’s the complete package. The Spanish sensation is a shoot-out specialist – don’t leave her open! But defend her too closely and you’re at risk of being embarrassed. Palomares has a filthy crossover – hope those ankles don’t break!