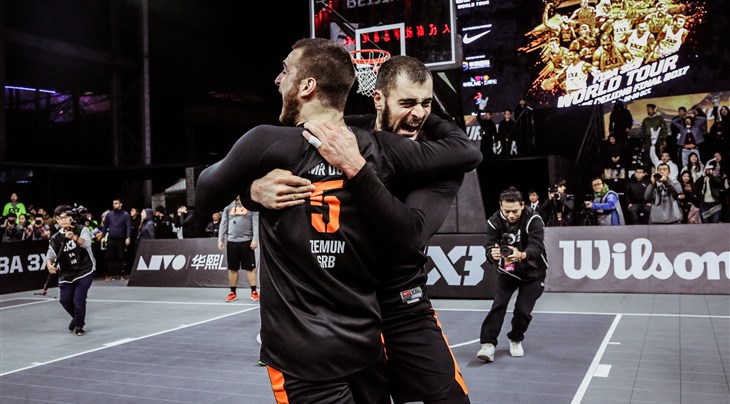 Remember when Novi Sad rolled through everyone like a bowling ball? Those days are over. And teams are no longer scared of the defending World Tour Final champions.

Princeton certainly aren't. They have been gunning for Novi Sad's crown. The teams have played six times this season and can't be split. Most recently, Princeton won a classic semi-final at the Los Angeles Masters –without star Robbie Hummel!

Damon Huffman on that occasion was splashing from Venice Beach and Novi Sad need to pay close attention to him. There are battles everywhere.

Who is going to lay the smackdown- Hummel or Dusan Bulut? Who will control the paint - high-flyer Kareem Maddox or bulldozer Tamas Ivosev?

Who will collect the most two-pieces - Craig Moore who always demands more or Dejan Majstorovic aka the Maestro? And let's not forget Huffman and Marko Savic who can do a little bit of everything.

This could easily be a preview of the final. Princeton are desperate to land the first blow. You come at the King, you best not miss Princeton.

You want to frighten Piran on Halloween? Dress up as Liman players. Over the past two seasons, Piran has only beaten the Serbs once in seven games. They have lost recently in knockout stages in Montreal and Jeddah.

However, the Slovenians did win in the quarter-finals in Prague and can look back at that for inspiration. The teams have changed slightly since then but still Piran knows they can beat their nemesis.

This is a battle between two of the iconic 3x3 teams who play the game so beautifully. You want to see perfect passing and movement off the ball? Watch this game.

Liman have chemistry you only read about in science books. But they might have met their match.

Simon Finzgar and Gasper Ovnik have been schooling opponents for years - but rarely been able to take Liman to class.

Can the tables be turned? You're going to have to watch to find out.

It might be the greatest 3x3 game ever played. Certainly the most dramatic ending given the stakes. Let's recap - sorry Novi Sad fans! Bogdan Dragovic hit the craziest shot imaginable in the biggest upset since Happy Gilmore beat Shooter McGovern.

The Dragon slayed the beasts of 3x3!

Since that heartbreak, Novi Sad have been out for revenge like Bruce Wayne. They have won four of the last five games since, including most recently at the Los Angeles Masters. Zemun, however, did win the final in the Belgrade Challenger in a Serbian hometown showdown.

And it's on the big stage that Zemun will feel most comfortable against their rivals. But you just know Novi Sad haven't forgotten the ghosts of the past. They will be looking to lay down another beat down.

Whatever happens, this will be fun to watch.

These two surprise packets have added a lot of entertainment to the World Tour. And they come into the Utsunomiya Final as two of the hottest teams. The Lithuanians are already Masters champs having spectacularly won in Montreal.

They play the game beautifully and know how to do all the right things.

Jeddah, too, have started to emerge in recent months. They made the knockout stage of three Masters and finished fourth in Debrecen. The Saudi Arabians were so impressive that they leapfrogged talented teams Vrbas and Ulaanbaatar MMC Energy to qualify for Utsunomiya.

But these two teams have never squared off before. It's the first chance for Jeddah to try the unthinkable and stop the one-two punch of Aurelijus Pukelis and Marijus Uzupis which is deadlier than Mayweather's best combination.

Jeddah also are dangerous. Khalid Abdel-Gabar is the heart and soul of the team, while Szymon Rduch has been on this big stage before. He knows what to do.

This could well be the beginning of 3x3's new epic rivalry.

Edmonton has been the shiny new toy this season. And they have deserved to be hyped up with a spectacular debut season culminating in winning the Nanjing Masters earlier this month.

In some respects, they have overshadowed some of the established 3x3's teams - one being Team Amsterdam. It's easy to take the Dutchman for granted. They are always consistent and competitive. Amsterdam made knockout stages in all five Masters they played, including three semi-finals appearances.

Maybe it's time they reclaim some public love against 3x3's new darlings. Have you really forgotten about Dimeo van der Horst? Who, statistically anyway, was the most entertaining player of the World Tour as the leader of highlights.

He will battle Jordan Jensen-Whyte in a showdown of athleticism that would not be out of place in the track and field events of the Tokyo Olympics.

We always love a big man battle. Kyle Landry vs Jesper Jobse - two giants who play with finesse - will be worth the watch.

And did I mention that the teams split their four meetings this season? Bragging rights - not to mention a crucial victory - is on the line in Utsunomiya.

Who's going to come out on top?