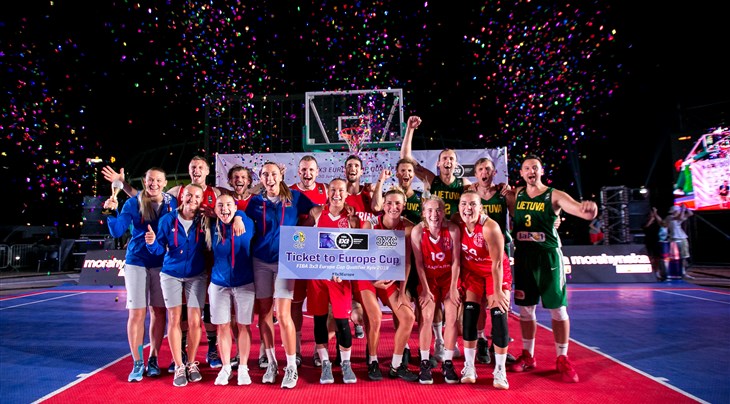 KYIV (Ukraine) – Austria’s men and Denmark’s women will make their Europe Cup debut after beating the odds at the FIBA 3x3 Europe Cup Ukraine Qualifier in Kyiv on June 29-30.

That Danish women team made history on Sunday. After beating Sweden in a do-or-die game, they became the first-ever team out of Denmark to qualify for the FIBA 3x3 Europe Cup, which will take place in Debrecen, Hungary on August 30 – September 1 this year. Down 10-6 with 2 minutes to go, Denmark came back to send the game to overtime. With the game and qualification on the line, Maria Steen Jespersen swished a short turn-around jumper. The 25-year-old was 2nd in scoring in Kyiv with 19 points in 4 games.

HISTORIC: 🇩🇰 Denmark qualified for their 1st-ever #3x3Europe 🏆 after @mjespersen12 hit a clutch turn-around J in OT vs Sweden. pic.twitter.com/U390fstOMY

Belarus was the only other women’s team in Kyiv to get their ticket to Debrecen. The team had a perfect 4-0 record over the weekend. Their leader Natallia Dashkevich was unstoppable in the low post in Ukraine. She topped the scoring charts with 28 points in 4 games.

On the men’s side, Austria’s men will also make their first-ever appearance at the Europe Cup (the women’s team did it before in 2016). Austria had a 4-1 record over the weekend and beat several 3x3 powerhouses like Croatia, Czech Republic and Estonia to earn their ticket to Debrecen. 22-year-old Renato Poljak and the handle-ready Moritz Lanegger finished 3rd and 4th overall in scoring for the Austrians.

Lithuania were the only other men’s team who qualified for the Europe Cup. It will be the country’s great return to the competition. Their last appearance was in 2014 on the 1st edition. They won bronze that year. Lithuania were 4-0 in Kyiv and continued to impress after a good World Cup, where they beat France.

While newcomers shined at the Ukraine Qualifier, the usual suspects disappointed. For the first time ever, there will be no Czech team at the Europe Cup. Estonia failed to qualify in both genders as well. Neither Bosnia and Herzegovina (who qualified last year) nor Croatia made it in the men’s category.