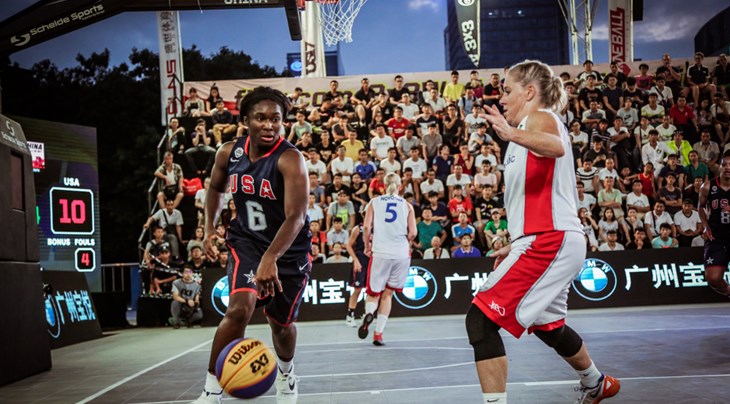 SEATTLE (USA) - Force 10 players and management understand the significance of being the first ever professional U.S. women’s 3x3 team.

The gravity of the historic formation is clearly evident in the team’s social media, which uses #foundingmothers in posts. The newly formed team was put together by Force 10 Sports Management, which owns the Seattle Storm in the WNBA.

Alexis Peterson, Cierra Burdick, Linnae Harper and Megan Huff comprise Force 10, who will compete at the Red Bull 3x3 Circuit where official ranking points are on the line. Burdick, Peterson and Harper have all played in the WNBA, while Huff was drafted by the New York Liberty this year.

Burdick, who was the No. 14 pick in the 2015 WNBA draft, says she is excited to be part of the history-making team. “We don’t take it for granted that we are the first professional 3x3 women’s team,” she says. “We want to be a pioneer and further the opportunities for women players in the US.”

“The US are behind China and European countries in women’s 3x3 and we want to close the gap,” she says. “We have so many great basketball players. This is a great avenue to keep playing the game.

“3x3 is such an exciting game and I have fallen in love with it. It’ is so fast paced and every possession matters. 3x3 is starting to take off and it’s fun to be part of the ride.”

With 3x3 making its Olympic debut in Tokyo, Burdick could be in the frame for national selection if Force 10 takes off. “Being part of the Olympics would be a dream come true but we’ll see what happens,” she says. “But hopefully I can at least play a little part in helping the US qualify.”

Force 10 chief executive Alisha Valavanis hopes the team’s professionalism encourages women to take up 3x3. “Our goal is to help build a new pipeline that provides opportunities for women and girls to get involved from the grassroots level to the professional level,” she says.

“We will use the early years to grow and hopefully influence the popularity of the 3x3 women’s game in the U.S.

“In the long term we hope to create a business model that advances women in sport.”

Valavanis says Force 10’s formation has sparked a "really positive" public response. “Players seem to see the immense potential here and the community has been really supportive as we try to build something new for women in the game,” she says.

“Once people have the chance to watch 3x3, I think they’ll be hooked.”