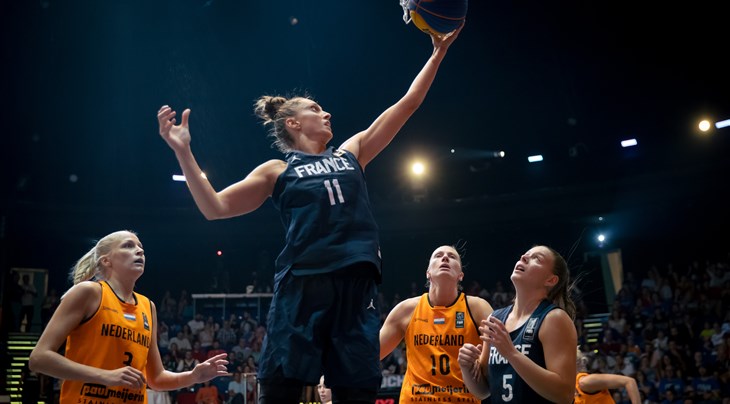 BUCHAREST (Romania) - France star Ana Maria Filip returns to Bucharest - where she was born and where her 3x3 career took off - for the FIBA 3x3 Women's Series Bucharest Stop on August 10-11, 2019.

The number 2 player in the world leads a French team. which has dominated the Women's Series on its inaugural edition. 'Les Bleues' have won 4 of the 8 first stops and have a comfortable 210-point lead on top of the season standings. How comfortable is this lead? If France finished last in the next 3 stops and the team ranked 2nd (Canada) would win all 3, France would still remain 1st in the standings. There are 7 events left before the end of the season.

"What makes our team special is our defense," Filip said. "No matter who's on the court, we give our everything on the defensive end. Offensively, we really help each other out. There are no egos. If one of us is on fire, the rest of the team will keep feeding her. We do substitutions all the time and have a great chemistry on the team. We get on well and enjoy spending time together, which is very important in 3x3 because - you know - we're just 4 !"

Thirty years ago, Ana Maria Filip (née Cata-Chitiga) was born in the Romanian capital, the daughter of a women's basketball player and a men's volleyball player (who won a medal at the 1980 Moscow Olympics).

"Bucharest and Romania; these are my roots," the 30-year-old Filip explained. "This is where I spent the first few years of my life. This is a very important place for me because this is where I learned some important values and where part of my family still lives to these days. It is a little bit of a second home to me."

She would only land in France at the age of 6 as her mother found a new club. At the age of 16, the towering Filip (6ft 4in, 1.94m) would obtain French nationality and start repping the country in basketball. She made 177 appearances for the French basketball national team until 2016.

In 2017, Filip starts a new challenge and brings France to the semi-finals of the FIBA 3x3 Europe Cup in Amsterdam. Her next attempt will be even more successful. Going back to her homeland for the Europe Cup 2018, she leads France to the gold medal, with a spot in the Team of the Tournament.

"This European title is definitely one of the top 3 moments of my career," Filip told. "I just don't know how to rank them. It was a summary of my whole life basically: my love for basketball, for France and for my Romanian family. It is very difficult to win titles and this time I felt like I was playing at home, representing a country that welcomed me with open arms."

Since then, she's become a 3x3 superstar, earning another medal (bronze) earlier this year at the FIBA 3x3 World Cup.

Five of the other 7 teams in Bucharest also competed at the World Cup 2019 though they mostly disappointed. Italy, Romania, Russia, Spain: all 4 of them disappeared in the quarter-finals though Italy were the reigning champs and Russia had won a medal in their last 3 participations. Even worse: Czech Republic did not even get past the pool phase just 3 years removed from their World title in Guangzhou, China.

This said, all of them have played better of late, starting from Czech Republic, who are just 1 of the 5 teams to have won a Women's Series title this year (the others are Australia, Canada, China and France). Spain finished 2nd twice though they will miss their star Sandra Ygueravide in Bucharest. Russia have made the Top 3 in each one of their 3 appearances and will see the return of Europe Cup 2017 MVP Anastasia Logunova. Italy just finished 3rd in Voiron and will play with their leader and World Cup 2018 MVP Rae Lin D'Alie.

The last 2 teams in Bucharest did not compete at the World Cup... but could well be the 2 biggest threat to a French encore in Romania. Canada sit in 2nd place in the season standings and won their first stop in Prague last week thanks to their twin towers, Katherine and Michelle Plouffe.

Poland only rank 10th in the standings at the moment but they were the talk on the street in the Czech capital last week. After stunning Russia at the buzzer to start the tournament, they won their next 3 games and only bowed out to Canada in the final.

These 2 teams are definitely on Filip's radar: "Canada impressed me a lot because they learn so fast and are really a team on the rise," the Europe Cup 2018 top scorer said. "Poland generated a lot of upsets in a very short period and Russia are always top notch. I was also impressed by 3 teams who are not in Bucharest: Japan, who beat us in the quarter-finals at the Chengdu Stop, China who are a very disciplined team and last but not least USA, who have not won many games so far but who have good young and physical players who are extremely difficult to deal with,"