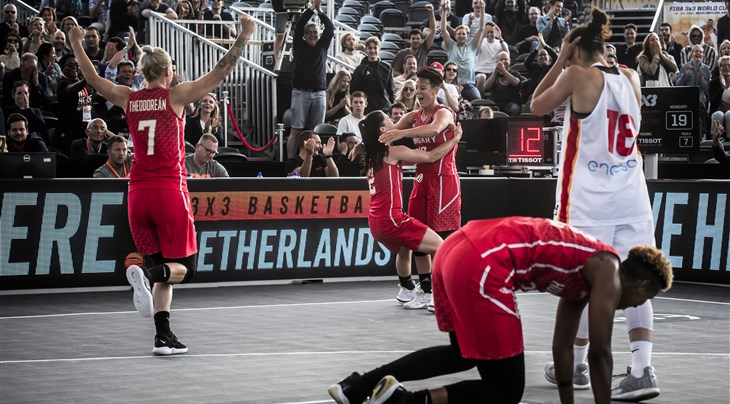 AMSTERDAM (Netherlands) - 4 men's teams and 4 women's teams will compete for the medals at the FIBA 3x3 World Cup after winning their respective quarter-finals on June 22.

In the men's category, Europe Cup 2017 winners Latvia outscored Ukraine (21-7) thanks to Karlis Lasmanis' performance of 6 points and 2 highlights but it was Agnis Cavars who really carried the Latvians to the semifinals after scoring 7 points on 100% shooting.

It was the Michael Hicks show for Poland against Puerto Rico. 'Money in the bank' scored 10 points and caught 6 rebounds to knock out Puerto Rico (21-14)

The US reached the semi-finals for only the 2nd time in 3x3 World Cup history after defeating Europe Cup 2016 winners Slovenia (21-14) in a game dominated by Canyon Barry on offense (7 points) and Robbie Hummel on defense (7 rebounds).

Serbia faced France in the last game of the day. The 4-time FIBA 3x3 World Cup winners will have a chance to defend their title after defeating 'Les Bleus' (20-12). Two-time World Cup MVP Dusan Bulut proved why he's the #1 player in the world with the shot of the tournament.

On the women's side, China finished business early (16-12) sending Romania back home. Di Wu chipped in 6 points while Gabriela Marginean shone for the Romanians with 7. Russia and Australia met in a game that lived up to the hype. The reigning Asian Champs defeated World Cup 2017 winners (19-13) thanks to the Alice Kunek - Bec Cole one-two punch, who scored 7 and 8 points respectively.

Hungary and Spain put on a memorable show on Museumplein. Sandra Ygueravide scored the first Tissot Buzzer Beater with 2 seconds to go to send the game to overtime. In the extra period, Aitana Cuevas missed the bunny under the rim. Dora Medgyessy responded immediately. She hit the Tissot Buzzer Beater to knock Spain out of the competition.

The three FIBA 3x3 World Cup 2019 medalists will stamp their tickets to the first Olympic Qualifying Tournament which will take place in March 2020. Location and dates will be announced at a later stage.

In the skills contest, Marie-Eve Paget won gold for France. The 24-year-old defeated Rae Lin D'Alie in the final. The FIBA 3x3 World Cup 2018 MVP had to settle with silver. Abdolvand Shadi won the first-ever medal for Iran in a FIBA 3x3 World Cup after defeating Andorra's Carla Puntí in the bronze medal play-off.