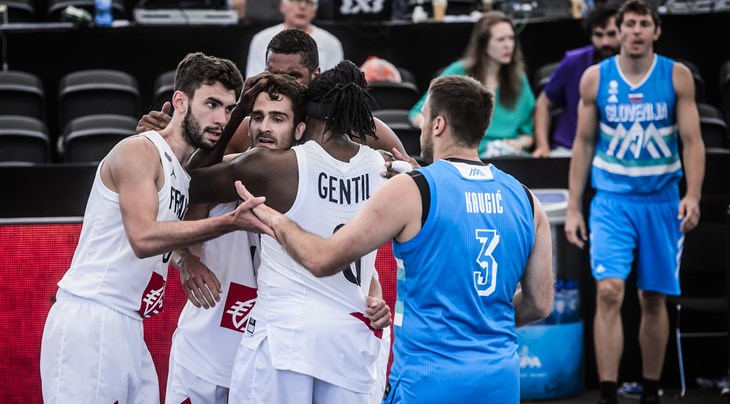 AMSTERDAM (Netherlands) - The FIBA 3x3 World Cup 2019 quarter-finals are set after a nail-biting day in Amsterdam on June 21.

In the men's category, 4-time FIBA 3x3 World Cup winners Serbia bounced back against Turkey and South Korea after their defeat against USA on Day 2. They advanced as seconds in men's Pool A. The US went through as first after another two wins, first over South Korea and then against hosts Netherlands (15-14) in a sold-out record arena to knock them out of the World Cup.

France's men also topped their group after finishing undefeated on Day 4 with two important wins over China and Europe Cup 2016 winners Slovenia, who advanced as second of Pool C.

On the women's side, the game of the day lived up to the hype and reigning Europe Cup champs France got a vital win over Asia cup champs Australia (17-16) to top women's Pool B. Both Australia and France qualified to the knock-out rounds.

World Cup 2018 winners Italy will have a chance to defend their title thanks to their success over Indonesia and Russia's victory over New Zealand in a dramatic ending that included a Tissot Buzzer Beater (17-16). 2017 winners Russia also advanced after finishing on top of the pool.

🇷🇺 Stolyar glides to the hoop for the @TISSOT Buzzer-Beater! #3x3WC pic.twitter.com/gkiZVVlxa5

In the Jack's Casino Dunk Contest, Kristaps Dargais (Latvia), Remco Frankin (Netherlands), Piotr Grabowski (Poland) and Vadim 'Miller' Poddubchenko (Ukraine) will compete tomorrow in the final. Unbelievable: the only 2 dunkers who had won the event before (Dmitry 'Smoove' Krivenko (Ukraine) and Rafal 'Lipek' Lipinski (Poland)) are out of the competition.