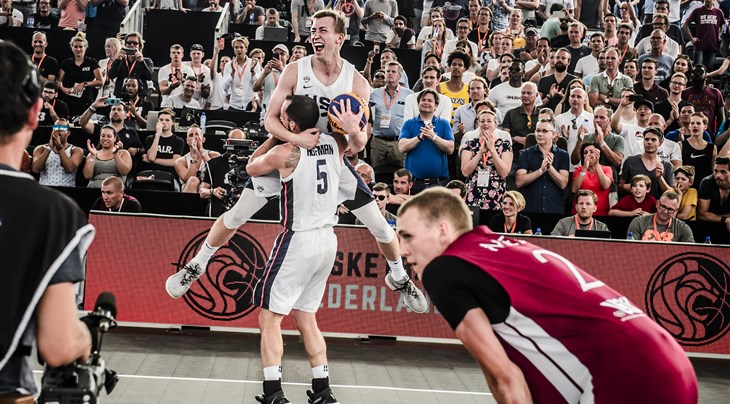 COLORADO SPRINGS (United States) – Robbie Hummel stamped himself as one of 3x3's best players and his magical season was rewarded with a prestigious honor to sit alongside basketball royalty.

The Princeton star on Thursday was named the 2019 USA Basketball Male Athlete of the Year – an award previously awarded to hoops legends Michael Jordan, Magic Johnson and LeBron James.

Reinvented. This game didn't give up on you @RobbieHummel. There's more 🥇 to win, champ.

The former Minnesota Timberwolves player was named MVP after a dominant performance in Amsterdam: a team-high 46 points at 6.6 points across seven games to lead USA's unbeaten run.

"It's incredibly humbling," Hummel said of the honor. "I think when you look at the names that are on that list, it's like, 'man, I'm not sure that I really belong almost'.

"You are looking at guys like Michael Jordan and Magic Johnson and the Dream Team. It's pretty cool.

"I'm very honored to have won this award. It is a product of a lot of hard work that our 3x3 team put in and the success that we had. I'm very thankful I got to play with a group of guys that just wanted to win."

Hummel's spectacular season also included leading Princeton's rise into one of the powerhouse 3x3 teams on the World Tour. He, unfortunately, missed their breakout Masters victory in Los Angeles but was a major catalyst in Princeton's runners-up finishes in Prague, Lausanne and the Utsunomiya Final.

Through his big frame and smooth shooting touch, Hummel became one of the toughest players to guard matched by an unrelenting desire to lead by example.

"Robbie helped USA Basketball accomplish an important milestone in winning our first FIBA 3x3 World Cup men's gold medal, and it was an impressive honor for him to be selected as the MVP at such a competitive event," USA Basketball chief executive officer Jim Tooley said .

"We are proud to recognize Robbie's incredible performances, and we are grateful for his commitment."