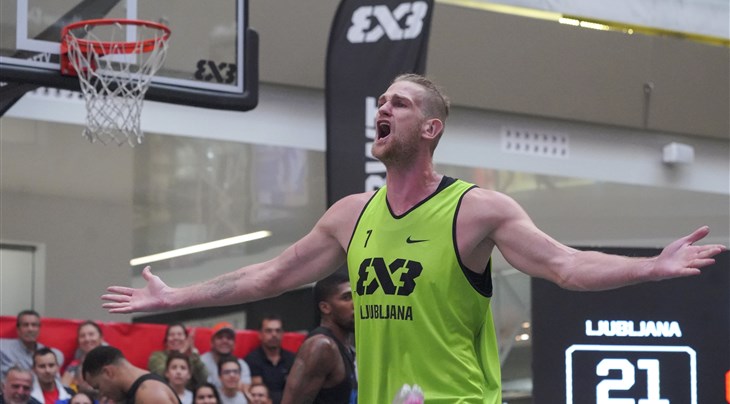 EKATERINBURG (Russia) – Top seeds Ljubljana (SLO) and Gagarin (RUS) have a golden opportunity to claim a confidence building triumph at the Ekaterinburg 3x3 Challenger on July 9 and 10, 2019.

No.1 seeds Ljubljana are always competitive but will be eyeing a title after a challenging period recently. They lost big man Blaz Cresnar aka ‘Birdman’ to an ankle injury during the Chengdu Masters but rallied immediately with a semi-finals finish at the Ulaanbaatar Challenger.

The Slovenians were less successful in Lipik and Raudondvaris, where ‘Birdman’ made his return. Ljubljana finished a disappointing eighth in Lithuania but ‘Birdman’ made an impressive comeback and should be able to fly even higher this time around.

Ljubljana will have to overcome the absence of star Jasmin Hercegovac, who will be replaced by former U23 Nations League winner Stojan Dekanović.

No.2 seeds Gagarin could well be the favorites in front of their home fans and having finished third at the Haining 3x3 Challenger last month with their only loss being a tight 15-13 defeat to Zemun in the semis.

Stanislav Sharov was sensational in Haining with 30 points at an average of 7.5 points and will be once again relied upon in a tournament where the Russians will have strong local support. Gagarin also finished third at the Moscow Challenger last month.

Fourth seeds Ralja Intergalactic (SRB) have momentum to go all the way after finishing second in Raudondvaris. Their two snipers Nebojsa Kilijan and Vuk Obradinovic were hot in Lithuania and will need to be closely guarded by opponents on the perimeter.

There are nine Russian sides in the 16-team competition.

The two top teams will earn tickets for the Lausanne Masters on August 23-24 in the sixth stop on this season’s FIBA 3x3 World Tour.

World No.2 Liman (SRB) and Princeton (USA) have already qualified for the event in Switzerland.