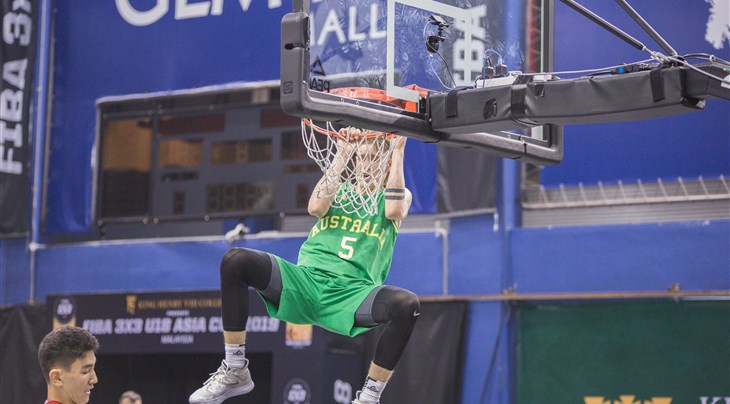 Dennis was part of Australia's impressive run from qualifiers to the Bronze Medal in Malaysia. They were unlucky not to make the final after losing a semi-final heartbreaker to eventual champions Japan.

But the Green and Gold rebounded from the disappointment with a gutsy win over No.1 seeds China to cap off a memorable tournament for Australia with their women's team capturing gold. Dennis top-scored against China with 8 points as he repeatedly drove to the hoop to power Australian onto the podium.

With his aerial domination, Dennis often sparked Australia with his breathtaking dunks and impressive finishes around the rim. He not only energized his team but ensured the stands were rocking making him highly popular with the fans.

Numerous spectators took selfies with Dennis to underline his eye-catching performances. The Brisbane Bullets development player said he enjoyed putting on a show.

"I love to get to the rim and try to pull off dunks to pump up the crowd," he said. "It’s great to get the crowd going and really feed off them. I love to entertain but I think it also energizes my teammates. They seem to love it."

On a historic day when their senior men’s basketball team took down mighty Team USA, it was only fitting that Australia displayed similar gritty characteristics in Malaysia. "We wanted to play in the best tradition of Australian basketball - play hard and never give up," Dennis said. "We did exactly that and I’m so proud to have won a medal here."

It's not just on the court where Dennis will have fond memories of FIBA 3x3 U18 Asia Cup 2019. The 18-year-old made new friendships off it underlining his significant impact.

"We became the favorite team for some Vietnamese kids in the crowd, and that was really cool to interact with them and teach them about 3x3," he said. "It’s been an amazing experience in Malaysia."