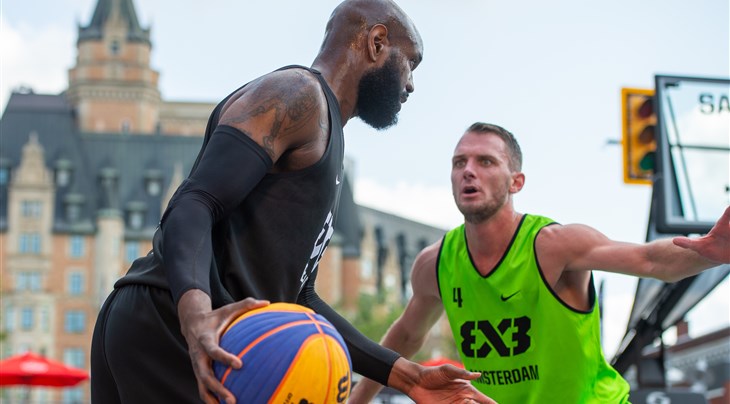 SASKATOON (Canada) - Edmonton is the only Canadian team remaining in the competition at the FIBA 3x3 World Tour Saskatoon Masters after the pool stage on July 20 2019.

4 Canadian teams started entered the competition today at the FIBA 3x3 World Tour Saskatoon Masters but only Edmonton made it out from the pool stage after finishing with 2 wins over Amsterdam in a rematch of the Mexico Masters 2019 quarter-finals and Winnipeg AP in Pool B. Steve Sir and Kyle Landry led the team in scoring with 14 points each.

Edmonton's rival in the quarter-finals will be San Francisco 3Ball who upset Princeton in a win-or-go-home game after both squads lost to 2017 World Tour Final winners Zemun earlier in the day. The Serbians dominated Pool D with a 14-10 win over Princeton and a 22-14 victory over newcomers San Francisco, who were making their World Tour debut in Saskatoon.

In Pool A, Liman and Kranj advanced to the quarter-finals as both defeated local heroes Saskatoon, who were playing their last World Tour Masters as the team announced their retirement at the beginning of the World Tour season. Stefan Kojic was a force on Day 1 with 15 points, 7 more than Mihailo Vasic (8), the second-best scorer of Liman.

No cameramen were harmed in the making of this block! 💪#3x3WT pic.twitter.com/ZXtOnkf6xB

Last, but not least, Piran proved once again why they have one of the best passing game in the circuit. The Slovenians, led by Gasper Ovnik with 17 points, outscored Vrbas (21-16) in the Tissot Fastest Game of the day and then defeated Old Montreal (21-11). Both squads battled later tho decide who would be the 2nd team advancing to the quarter-finals in Pool B. The Serbians didn't disappoint and will play the quarter-finals tomorrow.