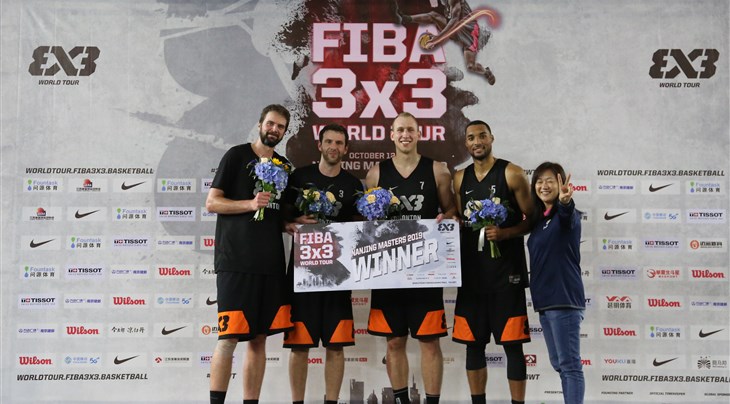 The Canadians avenged a final loss on their home soil at the Montreal Masters by winning round 2 against Sakiai Gulbele (LTU) this time around (21-17).

Steve Sir topped all scorers with 7 points in the final, including 3 shots from behind the arc. The Canadian sharpshooter - who holds the all-time record at a World Tour shoot-out contest - was named MVP after scoring a team-high 37 points over the weekend.

Marijus Uzupis had 7 points in the losing effort for Sakiai Gulbele. Big man Aurelijus Pukelis flirted with a triple 5 (6 points, 5 rebounds and 4 highlights) and was the top scorer in Nanjing.

The 2 finalists - the 6th and 7th seeds respectively - had to pull off some big upsets in Nanjing. Edmonton beat the number 3 team in the world Riga Ghetto (LAT) in the semi-finals while Sakiai Gulbele defeated World Tour standings leader Liman (SRB) at the same stage. Edmonton are feeling themselves at home in Nanjing. Coincidentally, they won the Fountask Nanjing Challenger with the exact same roster on April 20-21 this year.

Both teams have now secured their ticket for the FIBA 3x3 World Tour Final, which will take place in Utsunomiya, Japan on November 2-3, 2019.

Lausanne (SUI) and Vrbas (SRB) are currently ranked 11th and 12th in the standings but neither of them will play in the last Masters of the season, which will be held in Jeddah (KSA) on October 18-19. Six teams can still mathematically come from behind in Saudi Arabia: Jeddah (KSA), Ulaanbaatar MMC Energy (MGL), Utsunomiya (JPN), Balanga Chooks (PHI), Tokyo Dime (JPN) and Lyon (FRA).