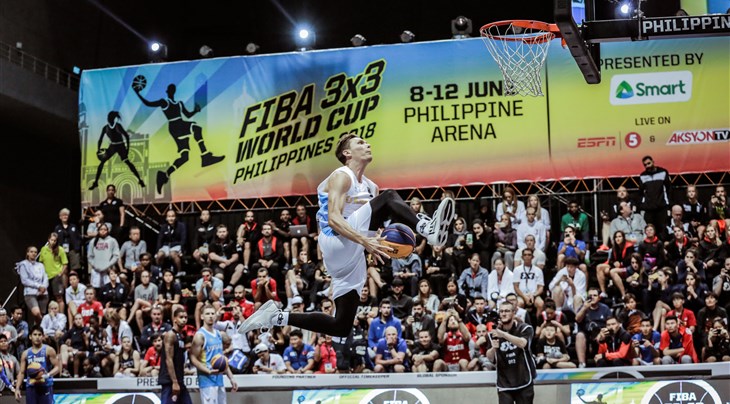 Smoove made history in the Philippines last year by becoming the first-ever man to win the dunk contest twice at the FIBA 3x3 World Cup. He might not be the most gifted athlete in terms of leaping abilities but nobody tops his hand speed and creativity. It would be amazing if Smoove won the dunk contest for the 3rd time but these 4 pro dunkers don’t see it that way:

Lipek is the only other pro dunker who won the contest, back in 2017. The Poznan native has more hops than Super Mario and is a natural-born entertainer. He can also spin like Peter Parker. 10’s are the only option when he nails his 360 between the legs or his 720.

What if Smoove’s biggest rival came from his own country? Miller has not shined yet at the World Cup (bronze in 2017) but he’s become the World Tour dunk champ on the 3x3 pro circuit both in 2016 and 2018. Nobody punches the rim like he does and he’s known added some style on his dunks, like his signature Karl Malone hand behind the head finish.

He has turned 29 yet and still it seems he’s been dunking while his opponents were still in kindergarten. Some nickname him ‘Hulk’ for his supernatural biceps. We just call him ‘Thor’ cause of the way he hammers it down. He’s also the tallest dunker of the bunch, which means he’s gonna be up there like a drone in Amsterdam.

Grabowski is so new he doesn’t even have a nickname yet. The 21-year-old shocked the world by winning the World Tour Prague Dunk Contest last year. Not only does he have more bounce than an old washing machine, he also has quick hands. Watch out if he nails his signature under-both-legs dunk.

The dunk contest qualifier will be held on Friday, June 21 at 9.30pm GMT+2. The top 4 dunkers will make it to the final the day after at 9.15pm. Both contests will be broadcast live on youtube.com/FIBA3x3.