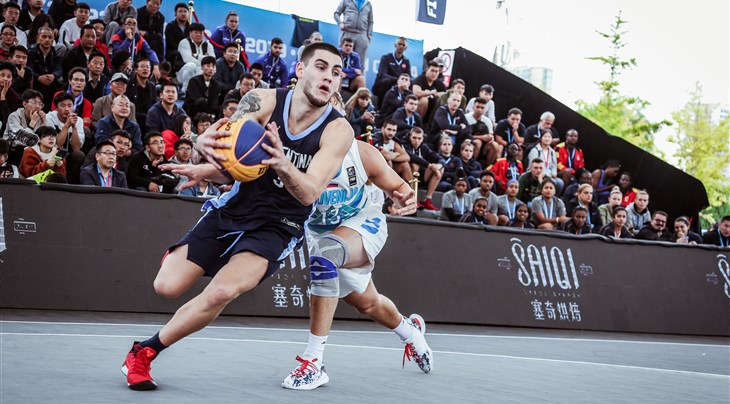 In the men's category, the fight for second spot out of Pool A essentially came down to the mouth-watering clash between surprise packets Argentina and New Zealand. This high-quality game lived up to the hype and fittingly went into overtime.

Argentina defeat New Zealand in OT thanks to the @TISSOT Buzzer Beater pic.twitter.com/F45jZVo1W3

The 18-year-old then booked Argentina's spot in the knockout stages with a spectacular 11-point onslaught to lead the No.16 seeds past Slovenia 19-16.

Defending champs Russia continued to prove why they are the team to beat with a 21-5 beat down of Turkey. Reigning MVP Alexander Zuev starred once again with a game high 11 points, including four bombs from deep.

Russia's unbeaten record continued with a 22-14 victory over New Zealand to storm into the quarter-finals. Once again, Zuev was the standout as the sharpshooter drained a trio of twos.

Pool C was a dogfight with Ukraine, Italy and Brazil finishing on three wins apiece. Ukraine emerged on top with their pivotal 20-16 victory over Brazil proving decisive.

Italy then grabbed a quarter-final berth with a thrilling 21-18 victory over Ukraine as Brazil unluckily missed out.

There will be Pool B and D action on Day 4.

In the women's draw, the Netherlands finished the pool stage undefeated after defeating Hungary (19-12) and edging out Switzerland (16-12).

Hosts China finished second from Pool B after beating Hungary (10-7) and Sri Lanka (21-6).

No.5 seeds France qualified for the quarter-finals after convincing victories over Japan (21-10) and Italy (20-6). Les Bleus rediscovered their best after a shaky start to the tournament, particularly the dynamic Victoria Majekodunmi who dominated with 19 points across the two blowouts.

France were joined out of Pool D by Japan who effectively booked a berth with a vital 20-11 victory over Ukraine.

There will be games from Pool A and C on Day 4.