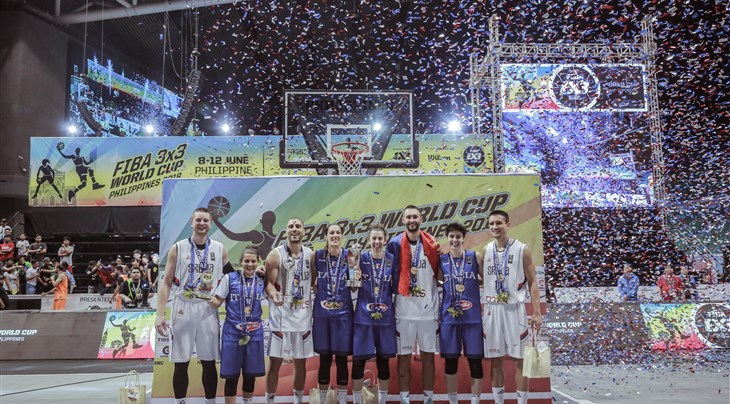 MIES (Switzerland) – The 40 participating teams (20 men’s and 20 women’s) were divided into 8 pools of 5 - none more difficult than Men’s Pool A featuring last year’s 2 finalists Serbia and the Netherlands besides USA – following the automatic seeding of the 6th edition of the FIBA 3x3 World Cup, which will take place in Amsterdam in exactly 4 months, on June 18-23, 2019. For the second year in a row, Serbia and the Netherlands will meet as soon as the pool phase. The two 3x3 powerhouses (also both finalists at the World Cup 2017) are in for an early clash with the United States, not to mention South Korea and Turkey. Only the first 2 teams in each pool advance to the quarter finals meaning one of the main contenders in the men’s category will be eliminated in the pool phase.

The other reigning champions – Italy’s women – got a very similar outcome in Pool D. They will meet 2017 world champions Russia and 2016 silver medalists Ukraine, not to mention Indonesia and the team which will finish third at the FIBA 3x3 World Cup Qualifier, which will be staged in San Juan, Puerto Rico on May 4-5.

The seeding is conducted automatically according to the FIBA 3x3 Federation Ranking of each national federation at the February 1, 2019 cut-off date. As per FIBA 3x3 regulations (Book 6), teams are seeded as follows:

Russia and Ukraine will also meet in the pools in the men’s category. The 2017 Asian champions Mongolia, Estonia and the team ranked 1st at the World Cup Qualifier will complete a loaded Pool B.

In the women's category, the Dutch hosts – who won silver at the Europe Cup last year – will get serious company with 2016 European champions Hungary and last year’s World Cup semi-finalists China. Latvia and Turkmenistan will be the other two teams to beat in Pool A.

The defending European champions France will be the heavy favorites in Pool B, which will also feature Andorra, Japan, Switzerland and the team ranked 1st at the World Cup Qualifier.

In Pool C, the 2016 World champions Czech Republic will have to deal with 2016 European runners-up Romania, on top of Iran, Mongolia and the team ranked 2nd at the World Cup Qualifier.

FIBA 3x3 events are played with Schelde backstops, protected by MagicSky's tents and benefit from Wilson's innovative and specially-made ball for 3x3.