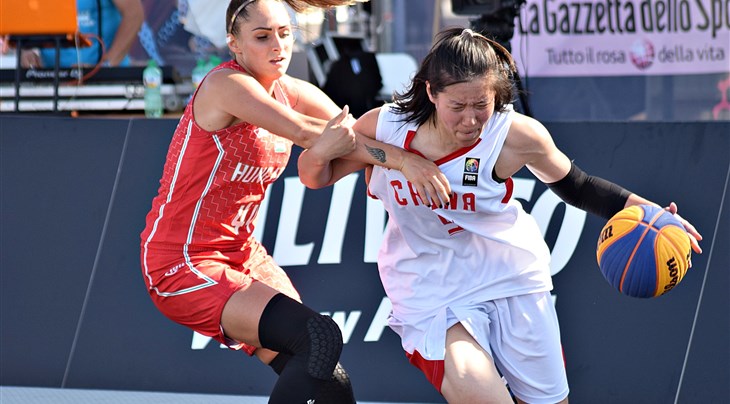 If you ever thought their World Cup title was an accident, well think again: China swept the Lignano Stop: 5 games, 5 wins.

A few stats to showcase China's domination? 1st in points per game. highlights per game, number of drives, 1-point and 2-point percentage.

ZhiTing Zhang was unstoppable inside. The 23-year-old led her team in scoring with 34 points in 5 games (4th overall). World Cup MVP JiaYin Jiang chipped in 28 points on an outrageous 55% from outside the arc (11/20). Her biggest shot came in the pool when she hit the buzzer beater against the Italian hosts.

In the final, China had an impressive comeback win against Spain.

Down 14-10, the World Champs looked for ZhiTing Zhang, who scored the next 5 points for China, including a long-range bomb. The game was tied at 15. YingYun Li scored a layup, Jiang added a free throw. Zhang blocked Sandra Ygueravide's layup attempt and Wu Di drove to the rim to give China a 2-point lead. Aitana Cuevas Mediavilla's desperation 2 at the buzzer was off. China won 18-16.

Spain had an outstanding showing in Italy. Their only 2 losses came at the expense of China. Ygueravide topped the team in scoring with 33 points (5th overall).

The 2 leading scorers in Lignano came from the 2 semi-finalists: Cyesha Goree confirmed her brilliant silver-medal run for Hungary at the World Cup and Katherine Plouffe (Canada) continued to impress. The 26-year-old is now the top scorer of the Women's Series, ahead of Migna Touré (France) and Rae Lin D'Alie (Italy).

With this 1st Women's Series title this season, China move to 7th in the overall standings (160pts), just 20 pts away from 3rd place Italy and Czech Republic, 50 pts behind 2nd place Canada but far far away from leaders France (who have 320pts overall).