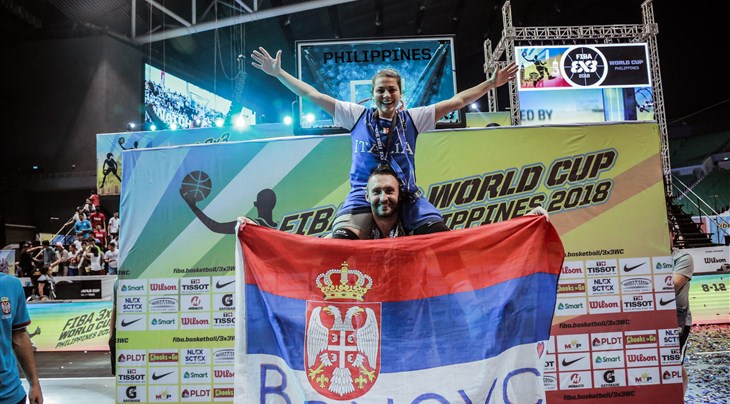 MIES (Switzerland) – The line-up has been finalized for the FIBA 3x3 World Cup 2019 and excitement is bubbling over next month’s showpiece event in Amsterdam. With the field set, let’s rank the pools across the men’s and women’s competitions.

In every tournament, there is a Group of Death. This is it. If Puerto Rico are the lowest seed in this pool, then you know it’s going to be a dogfight. They are in hot form after a perfect record at the FIBA 3x3 World Cup Qualifier 2019 in front of their home fans.

And they have dunk machine Luis 'Pela Coco' Hernandez who is built bigger than Thor.

No.2 seeds Russia headline the pool but teams will be out for them, especially foes Ukraine. The 2017 Asian champions Mongolia and the always competitive Estonia round out this loaded group.

Three-time champions Serbia and the Netherlands square off in a repeat of last year’s final with the Dutch looking for revenge on home soil. The game is set to be the highlight across the pool stage but the star-studded teams will need to be at their best to get out of this group.

Mighty USA are seeded No.7 - two spots higher than the Netherlands - and will be aiming to end the European dominance of 3x3. Don't count out Turkey and South Korea, who will be seeking to make it more than a three-horse race.

Much like Puerto Rico, Australia impressed during the FIBA 3x3 World Cup Qualifier 2019 and are determined to put the proud sports country on the 3x3 map. But this group could be tighter than ‘80s NBA shorts.

The 2017 European champions Latvia and No.5 seeds Japan will be favored to progress but last year’s World Cup semi-finalists Poland can’t be discounted making another fairytale run. Neither can the always tenacious Brazil.

Take a 👀 at the highlights from the game that sent our @BasketballAus men 🇦🇺 to the @FIBA3x3 World Cup 🏆 #3x3WC pic.twitter.com/4JNZCYBpyR

2016 European champions Slovenia highlight Pool C which also features basketball crazy countries China and Lithuania. 2014 World champions Qatar will be hoping for a return to the glory days, while in-form France have the confidence to cause upsets.

Like Serbia in the men’s, reigning champions Italy don’t have it easy. They will meet 2017 world champions Russia and 2016 silver medalists Ukraine.

Confirming this is the Group of Death, No.10 Indonesia and New Zealand – who qualified after a thrilling campaign at the FIBA 3x3 World Cup Qualifier – can beat anyone on their day.

No.1 seeds China boast two of the top four players in the world and deserve to be favorites but they won’t have an easy path. The Netherlands won silver at the Europe Cup last year and will be inspired in front of their fans.

2016 European champions Hungary, Latvia and Turkmenistan round out the group.

Defending European champions France boast six of the top eight ranked players in the world to be the heavy favorites in this group. After that, things get interesting.

Japan are highly rated as the No.6 seeds, while Australia qualified after an unstoppable campaign in Puerto Rico. They loom as the dark horse of the tournament, a tag Switzerland and Andorra also will be vying for.

The @BasketballAus 3x3 women have advanced to the @FIBA3x3 World Cup after beating Brazil 21-3, with Bec Cole hitting the game winner! #3x3WC 🏆 pic.twitter.com/nsjOdWABlA

No.2 seeds Mongolia face a tough challenge from 2016 World champions Czech Republic and 2016 European runners-up Romania. Spain, led by the wizardry of Paula Palomares, can’t be discounted after a strong showing in Puerto Rico while Iran rounds out a strong group.