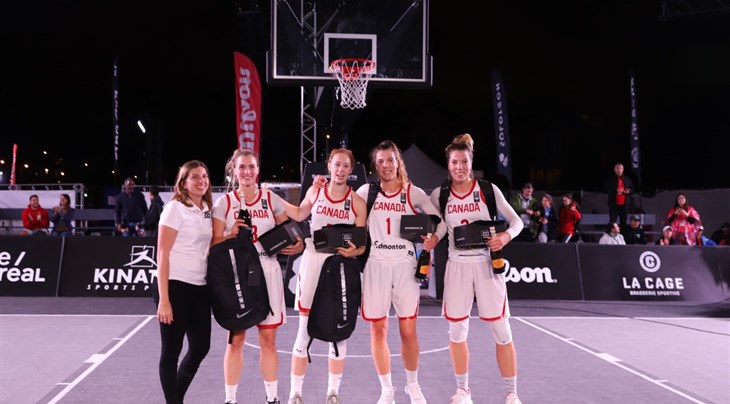 MONTREAL (Canada) - Canada won their third title this season at the FIBA 3x3 Women's Series at home in Montreal, Canada on September 7-8, 2019.

Canada continued their hot streak, red like a maple leaf of 15 wins in a row under the Jacques-Cartier bridge in downtown Montreal. They won all 5 games before the 10-minute limit on Friday and Saturday.

The 26-year-old finished second overall in scoring with 46 points, just behind US rising star Michaela Onyenwere (48).

With their win (their third consecutive title after Prague and Bucharest), the team featuring the Plouffe twin sisters (Michelle and Katherine) and sharpshooters Paige Crozon and Catherine Traer bridged the gap with France in the season standings.

The next stop will be staged in Udine, Italy on September 14-15.

This is the FIBA 3x3 Women's Series' inaugural edition. The competition was launched to offer women a chance to play 3x3 at the highest level on a regular basis and represents a unique opportunity to bring new countries on the focus as well as for the best players to prepare and offer an amazing show at the Tokyo 2020 Olympic Games.