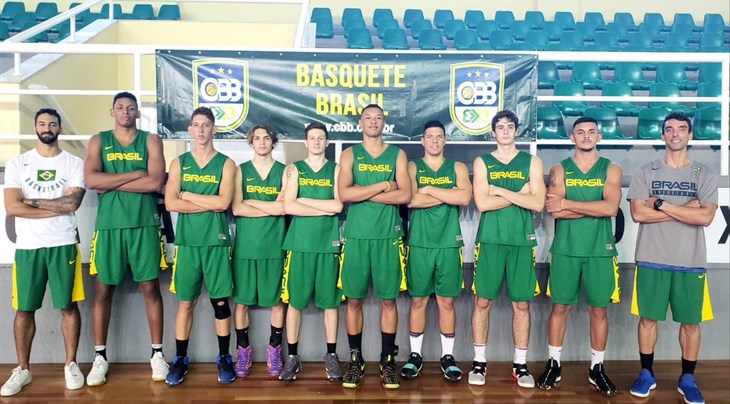 RIO DE JANEIRO (Brazil) - The Brazilian Basketball Confederation (CBB, for its Portuguese acronym) seeks to bolster its national teams in 3x3 and is preparing their men’s teams for the World Cups in the senior and U-18 categories. 3x3 has notably increased its popularity in Brazil, which is why CBB is fostering the development of both the men’s and the women's national teams, so that they can get as far as they can in their training, as in the qualifiers and the World Cups that will take place this year.

Expectation abounds during the practices of the men’s 3x3 teams, which started on April 26 at ESEFEX, in Rio de Janeiro. Coach Douglas Lorite, with the senior team; and Luca Carvalho, with the U-18, held several sessions to try-out many players and define who will represent Brazil in this year’s World Cups.

Coach Lorite defined the players that will go for the glory in the FIBA 3x3 World Cup 2019 in Amsterdam, Netherlands, from June 18 to 23.

“We chose the athletes based on tactical reasons, because the eight players were on the same level and it was difficult to define the four. I talked a lot with Luca Carvalho (Technical Assistant, and coach of the U-18 team) and we chose based on our opponents, and we defined our substitutes like that as well,” said Lorite.

The second stage of training for the Brazilian team will take place from June 12 to 15. Then, the national team will travel to the Netherlands, on June 16.

“We're in a very difficult pool, so we must work a lot to qualify for the quarter-finals. There are three teams that we must defeat and we're going to work on that objective,” the coach added.

Meanwhile, Luca Carvalho, U18 coach, defined the players that will defend the Brazilian colors in the FIBA 3x3 U18 World Cup 2019, which will take place from June 3 to 7 in Ulaanbaatar, Mongolia.

“Just as in the senior team, the selection was difficult. These were four long days for Douglas Lorite and me. He was also part of the practices and the final decision. We couldn't make any tactical decisions — something I like to do — because we don’t know our rivals, but we did establish some technical criteria as a priority,” Carvalho explained.

“Besides that, we arranged a good group that has good international experience and that is very united, as well as very committed. Expectations are high, not only for the World Cup, but also for the future of 3x3 basketball,” stated the coach who will also count on Raffael Mencarini (Club Esperia) and Luiz Henrique Souza Ferreira (CR Flamengo) as substitutes for the team.

The U18 national team will have their second and last stage of preparation practices from May 27 to 30 at ESEFEX in Rio de Janeiro. Lastly, on May 31, the Brazilian delegation will travel to Mongolia.

The team - led by Rafaella Bauerfeldt Lopes - featured Julia Carvalho (SC Corinthians Paulista), Karina Jacob (Sodiê Dules / LSB-RJ), Karla Costa (Vera Cruz Campinas) and Marley Conceição (Lady's Rio). They were only a step away from qualifying as the top 3 earned a ticket to the FIBA 3x3 World Cup, Their valiant effort was valued by CBB, who strive to develop this discipline as one of their great goals to achieve.

On Saturday, May 4, the national team made their Qualifier debut with a victory over Mali (20-15) and were later overcome by Spain (22-11). They closed their participation in the first stage after their defeat against New Zealand (14-18) Brazil then defeated Uganda (14-12) in the Quarter Finals, and in the Semis, they lost against Australia (21-3). In the game that would define the third place and the World Cup qualification, they fell against New Zealand (11-5).

"We're high-performance athletes and we know that the victory is always our greatest objective. However, since the work started, I'm happy to have represented and start to present to the world, effectively, women’s 3x3 basketball. We didn’t get the results we expected. Unfortunately, we had two final games where we couldn’t, physically, sustain our regular level, so we couldn't play tactically and use everything we had planned and adjusted in the training sessions,” said Bauerfeldt.

“I feel sad because we didn't get the spot, which would be very important for our growth (in the media, mainly) of the discipline. But at the same time, we need to see the positive side: in an international competition, after five years without playing, we got two victories — one of them against a team that defeated a nation that qualified to the World Cup. And, yes, we need to be happy because, of eight teams we arrived fourth. We must start from there, knowing that we need to improve a lot to reach the level that great powerhouses have today. I believe that’s the path: having more encounters with great powerhouses, popularizing the 3x3 format in Brazil, have better conditions to do a unified work, mainly with players that also play basketball. We must understand this as a basketball discipline too and not let it scatter or get divided,” said the Brazilian coach.

3x3 basketball is now installed in the world as one of the fundamental pillars of the sport’s development, backed by FIBA. It’s already an Olympic discipline that will debut in the Tokyo 2020 Olympic Games. Brazil doesn’t want to be left out of the event, which is why after disputing the World Cups, they will be focused on their new objectives. CBB will do everything in their hands to reach those goals in this modality.