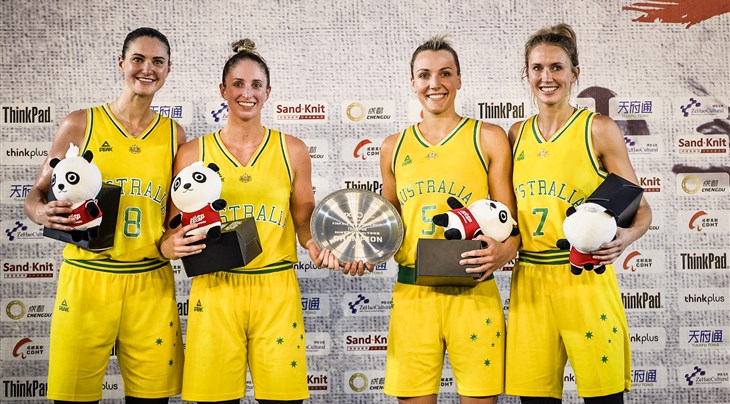 This Australian team cannot be stopped. After finishing undefeated at the FIBA 3x3 World Cup Qualifier in Puerto Rico and the FIBA 3x3 Asia Cup in Changsha, Australia stretched their winning streak to 12 in a row.

This time, it wasn’t as easy as the Aussies won a 2-point game in the semi-finals against the Netherlands and a 3-point thriller in the pool stage versus France. This said, event MVP Alice Kunek was on another level in Chengdu. The 28-year-old was the leading scorer with 46 points, 10 more than the second in the charts. She netted 11 points alone in the final. Her team-mate Rebecca Cole topped the key assists and drives categories and scored the winning basket in the final against Japan (21-15)

Japan were the big surprise in Chengdu. It’s not like the team came out of nowhere since Japan had just won bronze at the FIBA 3x3 Asia Cup a week earlier. This said, Mio Shinozaki was the only player left from that roster so it was difficult to know what to expect. After a difficult Day 1 where the team nearly finished last in its pool, Japan switched gear on Day 2 and took down 2 of the heavy favorites in European champions France (18-15) and the Chinese hosts (19-16). The speedy Shinozaki was key in Japan’s run (she finished 2nd in scoring) and got a little help from loooooong range specialist Naho Miyoshi, who represented Japan at the Rio 2016 Olympics.

The Netherlands took 3rd place after an unbelievable comeback win against the US in the quarter-finals, with 2 Tissot Buzzer Beaters, one in regular time and one in overtime.

Netherlands 🇳🇱 advance to the semifinals with an astonishing COMEBACK and a couple of @TISSOT Buzzer Beaters #3x3👊🔥 @3x3NL pic.twitter.com/iI8SZrXPkA

The next stop will be staged in Turin, Italy on June 14-15, just a few days before the FIBA 3x3 World Cup.