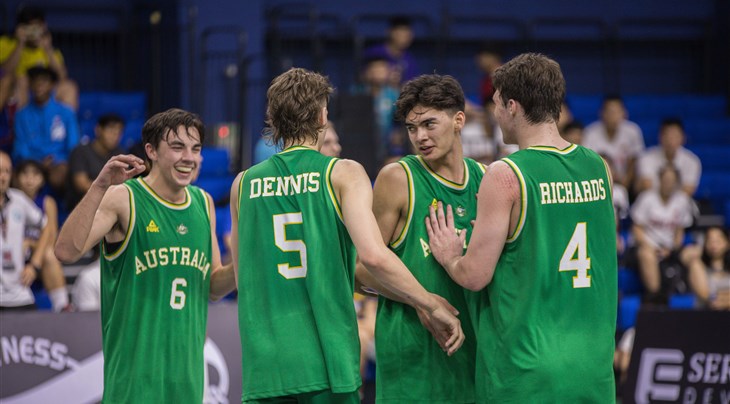 In Pool D, Australia flexed their muscles with victories over higher seeds Kazakhstan and Kyrgyzstan to power into the quarter-finals. After working their way through qualification on Day 1, a confident Australia proved they are the real deal and a legitimate medal contender.

Australia and No.4 seeds Kazakhstan loomed as an intriguing match-up and it didn’t disappoint. There was nothing between the teams in a high-quality contest and it came down to the wire.

Kazakhstan had the edge from two-point land but Australia’s athleticism made them hard to stop around the rim. With scores tied at 20, Daniel Foster hit a tough layup – just his second bucket of the game – to give Australia a pulsating victory.

Australia had an easier time against Kyrgyzstan with a convincing 21-13 victory. High-flyer Kian Dennis electrified the crowd with numerous dunks as Australia overpowered the No.5 seeds. Kazakhstan reached the quarter-finals after a thrilling 20-19 victory over Kyrgyzstan.

In Pool C, Philippines notched two tough victories over Vietnam and Turkmenistan. Their star Terrence Fortea was a scoring machine with 22 points across the games as he hit buckets from everywhere.

The Philippines started slowly against qualifiers Vietnam before Fortea caught fire and the No.3 seeds powered past their shorthanded opponents using just three players.

But Vietnam had their own hero with Antony Sundberg unstoppable chalking up a game-high 11 points, including four bombs from deep.

Vietnam eventually ran out of gas and the Philippines prevailed 21-18.

Once again Fortea inspired with 12 points against Turkmenistan highlighted by numerous clutch buckets. He drained two free throws to seal the Philippines’ 21-16 win

In the women’s side, New Zealand’s stifling defense smothered India and No.3 seeds Turkmenistan in outstanding performances. New Zealand and impressive India loomed as the key game of Pool C.

Qualifiers India showed their might with a 21-4 thrashing over No.3 seeds Turkmenistan. But a physical New Zealand countered India’s height with the towering Harsimran Kaur struggling inside after dominating the post against Turkmenistan.

New Zealand had no problems against Turkmenistan who did not score until over the midway point of the game. The No.6 seeds won under the time limit in a 21-4 rout with Emilia Shearer chalking up 12 points. Japan topped Pool D with victories over Thailand and No.4 seeds Sri Lanka. They overcame a tough challenge against Thailand with Saori Yasue catching fire from behind the arc, where 8 of her 10 points came from. Thailand won narrowly 18-15 before easily defeating Sri Lanka 22-11.

In the Shoot-Out Contest, Akitoshi Oguri (JPN), Zebin Wu (CHN), Xianglin Wu (CHN) and Camille Clarin (PHI) are the two men and two men respectively who will compete for the medals tomorrow.