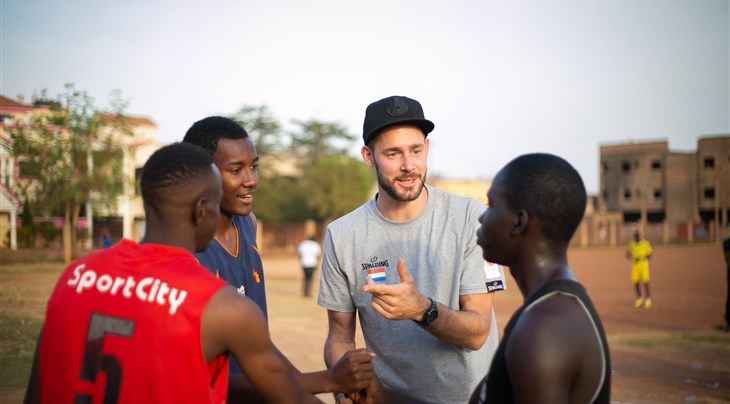 AMSTERDAM (Netherlands) – For Jesper Jobse, 3x3 has changed his life and taught him important skills beyond the basketball court.

The passionate Amsterdam Inoxdeals (NED) superstar travels around the world as part of the 3x3 Unites foundation he co-founded in a bid to educate youth and develop talent through 3x3’s guiding principles.

Notably, he has traveled to Mali annually for the past five years and imparted his wealth of knowledge to 3x3’s leaders in the West African country. "I like going to places where I can make a difference and use 3x3 as a tool to bring people together," Jobse, known as 'The Job', says.

"It has the power to help build communities and teaches people to step up and take ownership. 3x3 is a sport well suited to working with youth and helping them achieve their goals in life.

"I use 3x3 to inspire in Mali and other countries I visit."

Collaborating with Bas Rozendaal, his Amsterdam Inoxdeals teammate, Jobse has documented 3x3’s innate ability to connect communities and make people stronger in 3x3 for Development – the first ever book written about the sport. Jobse and Rozendaal, who also works at 3x3 Unites, teamed up with International Sports Alliance, GAME and Sporthochschule Cologne to write the book. The publication was officially presented to the media, a large number of sponsors, FIBA 3x3 Senior Communications Manager Julien Debove and more 3x3 basketball stakeholders on February 7.

Jobse, a former teacher, was first involved in 3x3 at the FIBA 3x3 World Cup 2014 in Moscow and quickly felt at ease with the game. "I played professional basketball for nine years but realized it didn’t work out," he says.

The 34-year-old says 3x3’s footprint contains core values that can be implemented in daily life. "It’s a player driven sport and we take ownership in what we do," Jobse says. "It is the best sport to develop youth.

"Life skills that can be derived from 3x3 include working together, problem solving, setting goals, believing in your own dreams, raising self-confidence and accepting different situations."

With the upcoming 3x3 World Cup in Amsterdam, Jobse is excited about the prospect of further promoting the sport in his homeland. "3x3 is growing like crazy in the Netherlands," he says. "The World Cup will be a boost for it in the city and for the country.

"The Netherlands has had 3x3 international success and that makes kids want to be part of the sport."

Right now, Jobse and his Amsterdam Inoxdeals teammates are preparing for the looming World Tour after a successful campaign last year, punctuated by a third-placed finish at the Bloomage Final in Beijing.

They will start their season at the Nanjing Challenger next month in a bid to qualify for June’s Chengdu Masters. "Our aim is to be a top three team this season, he says. "We have been training hard and had a really good preparation."

Amsterdam Inoxdeals are guaranteed to compete in 2 Masters this season thanks to their position as #4 team in the FIBA 3x3 team ranking at the beginning of the season. They will play in Saskatoon and Nanjing.

Jesper's book 3x3 for Development can be purchased at www.3x3unites.com