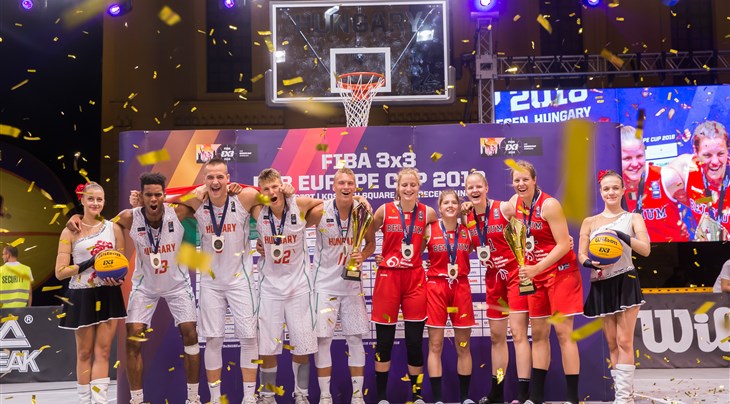 TBILISI (Georgia) - Twenty-four teams from 16 different countries qualified for the 5th edition of the FIBA 3x3 U18 Europe Cup, which will take place in Tbilisi, Georgia on September 6-8.

The hosts (Georgia), the reigning champs (Hungary's men and Belgium's women) and the 8 best teams in the FIBA 3x3 U18 Federation Ranking (Ukraine, Estonia, Romania & Russia for the men; Ukraine, Romania, Russia & The Netherlands for the women) already had their tickets to Georgia.

The remaining 12 spots were up for grab in 3 qualifiers over the weekend in Voiron (France), Rieti (Italy) and Szolnok (Hungary).

While some of the favorites lived up to the hype ( 2017 winners Hungary. 2018 bronze medalists Russia and 2018 runner-ups France in the women; 2016 and 2017 winners France and Belgium and last year's runner-ups Serbia on the men's side), some missed their tickets to Tbilisi.

World Cup 2019 runner-ups Turkey lost in the pool stage in Hungary (men) and Europe Cup 2018 bronze medalists Spain lost in their qualification game against Italy. In the women's category, World Cup 2016 silver medalists Czech Republic will not make it to Georgia.

This also left space for newcomers, like Turkey's women, who qualified for the first time for the 3x3 U18 Europe Cup. Also, Lithuania (men) will be back after not qualifying since 2015.