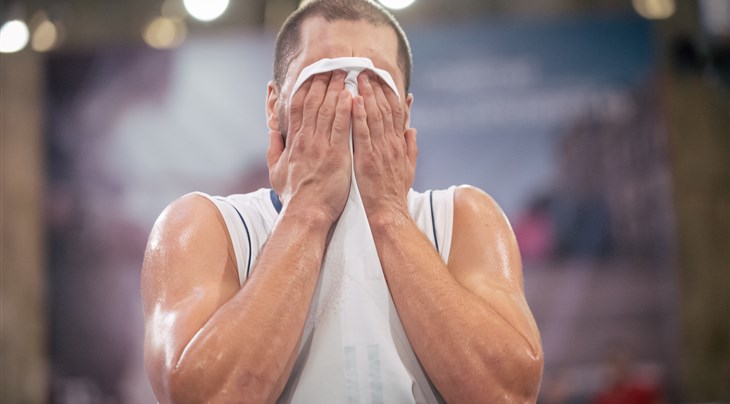 After winning the World Cup in 2012 and finishing 2nd behind Qatar in 2014, Serbia were the heavy favorites of the 1st edition of the FIBA 3x3 Europe Cup in Bucharest. They won every pool game before the limit (against Israel, Czech Republic and Spain) and were up against a young inexperienced Greek team in the quarter-finals.

But after a balanced start (6-6 after 3'30), Leonidas Kaselakis showed his stroke was as sweet as chocolate and led Greece to a stunning 10-2 run. Bulut's shot was not falling and Serbia had more bricks than Tetris. Pretty face Georgios Bogris - 25 years of age at the time - locked down the access to the rim and his team held on to a 20-16 win. Greece dropped their next 2 games and finished 4th. Both Kaselakis and Bogris went on to play for the Greek basketball national team.

2016 was supposed to be their year. The foursome of Bulut, Dejan Majstorovic, Marko Savic and Marko Zdero was unstoppable on the 3x3 pro circuits (back-to-back World Tour wins in 2014 and 2015). And the team cruised to the final after winning their first 4 games by an average of 8 points. And in the final stood Slovenia, a team that they knew by heart and systematically beat in the pro circuit.

But once again, things went south for Serbia at the Europe Cup. Anze Srebovt hit an over-the-backboard shot, which would fit in nicely in the venue of this year's Europe Cup (the Bucharest Metropolitan Circus). And with the game tied at 17 with less than a minute to go, The Sphinx Simon Finzgar hit one of the biggest shots of his career. Slovenia won the title and Serbia struck silver, their only medal in the history of the Europe Cup.

Because yes 2017 did not exactly go better for Serbia. The team had been unstoppable just a few weeks earlier at the FIBA 3x3 World Cup and started a winning streak of epic proportions. When Bulut & co. showed up in the semi-finals, they were undefeated in 22 games. The team put on a show in Amsterdam. It's not just that they won all their games before the limit, it's how they did it. Mr Bulletproof broke the Internet in the game against Spain with a sick ridiculous shammgod between the legs to win the game.

Latvia came out of nowhere with a 3x3 CV shorter than Kevin Hart's little finger. But what should have been a formality started being an absolute thriller. Bulut tied the game at 17 with 13 seconds to go and Majstorovic blocked Nauris Miezis to send the game to overtime. Serbia had a few chances but Miezis found (then) 23-year-old Karlis Lasmanis for the winning 2-pointer. Serbia missed out on the final and suffered another heartbreaking overtime loss against Ukraine in the bronze-medal game.

Serbia return to Bucharest for the 4th edition of the FIBA 3x3 Europe Cup, the only silverware that's missing in their trophy cabinet and their number one objective this season. They passed on the long trip to Mexico (for the World Tour) last week to be fresh for the event and arrive in the Romanian capital with a 10-game winning streak under their belt (7 wins at the World Cup, 3 wins at the Europe Cup Qualifier in Romania), not to mention a 22-game winning streak on the World Tour with Team Novi Sad Al Wahda (SRB). What could possibly go wrong?