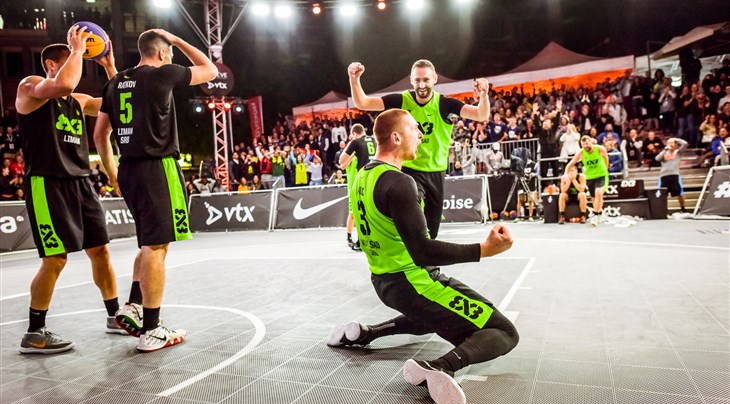 Let’s re-live the top 7 games from the World Tour.

The Beijing Final is so stacked that not even NY Harlem could get a spot! We are going to miss these ballers. The Americans had the talent – and disrespect – to clown anyone on their day but often just fell short like against Ljubljana in Mexico. This game had everything as both teams brought it.

Of course, there were the usual Dominique Jones aka Disco Domo dance moves and he seemed to inspire NY Harlem to a memorable upset. They had the game in the bag at 20-17 and needed just one more point but then things went full blown crazy like a Kanye West tweet with Jasmin Hercegovac splashing to get it down to one. David Seagers aka Super Dave became Super Bad when he narrowly missed two chances to win the game and that let two-time Masters MVP Hercegovac to coldly drain the buzzer-beater.

Ljubljana went on to win in Mexico and book a ticket to Beijing!

How is this mental game only seventh?

Let’s set the scene. Riga Ghetto had been embarrassed at the previous Masters in Lausanne by Serbian powerhouses Liman Tesla Voda, who were the hot favorites to repeat the dose. Riga had the early edge but you knew Liman were coming. The Serbs would prove too clutch, right? Nope, Riga held on through Kārlis Lasmanis who had ice in his veins.

And let’s not forget Agnis Čavars, who beasted inside like he was the Incredible Hulk. Upsets are always fun, so we just had to include this on the list.

The Mexico City Masters was loco. And this game was the wildest of them all. At 19 apiece, with the blackjack 21-point mark in sight, Princeton blew four chances to win it with Craig Moore missing three times. Ouch!

In Mexico, Will Martinez was hotter than guacamole and he only needed one opportunity. Call him the Wolf of Wall Street cause the bank was open for Will to score the Tissot Buzzer Beater to lead Ponce into the final.

Now we’re going to start featuring Novi Sad Al Wahda, who go into Beijing unbeaten this season. But they nearly lost a few times! It was No.1 vs No.2 and Dusan Bulut aka Mr Bullutproof against his rival Mr Robot Stefan Stojacic.

It seemed to be another one-sided thrashing for Novi Sad but the game had more twists than Mission Impossible Fallout. Mr Robot also had to battle Dejan Majstorovic aka the Maestro as the two had a shootout contest that brought the crowd to its feet.

Liman had a chance to send the game into overtime but Aleksandar Ratkov didn’t get the lucky bounce. More to come…

This seemed like a snooze-fest as Liman Tesla Voda appeared to still be asleep when the game started. Humpolec started fast and led 11-3 before Liman woke up. But Humpolec looked set for the upset leading 20-17 before Liman produced an incredible comeback.

This all happened within seconds - a huge splash from Mr Robot, a turnover and another huge two-piece from Stojacic who proved he had the cheat code with a ridiculous game-winner.

The game showed how 3x3 can change within seconds – here’s a tip, don’t try to pick winners until the 21-point mark is reached!

You thought Novi Sad’s escape earlier against Liman was good - this was next level. Riga needed just one basket to finally end Novi Sad’s dominance but couldn’t land the knockout and Karlis Lasmanis was denied twice at the rim by the Maestro who had his own block party.

The Maestro once again played tough D in the clutch and then coldly drained the game-winner as Novi Sad pulled off the greatest escape since Andy Dufresne in The Shawshank Redemption. You already know it, but Novi Sad won the Hyderabad Masters final too.

The number one spot just has to go to the two teams who have shared eight Masters between them this season. And this was the best of the Serbian Showdowns fittingly at the Olympic capital 2 years before the IOC puts 5 rings on 3x3.

Novi Sad had the edge for most of the game and the Maestro could have ended it twice but missed. Mr Robot had the algorithm to tie it at 20 apiece and Liman looked set to defeat their arch-rivals but Aleksandar Ratkov somehow blew the layup!

Just an unbelievable game in 3x3’s great rivalry. If they meet again in Beijing, you know it’s going to be special.