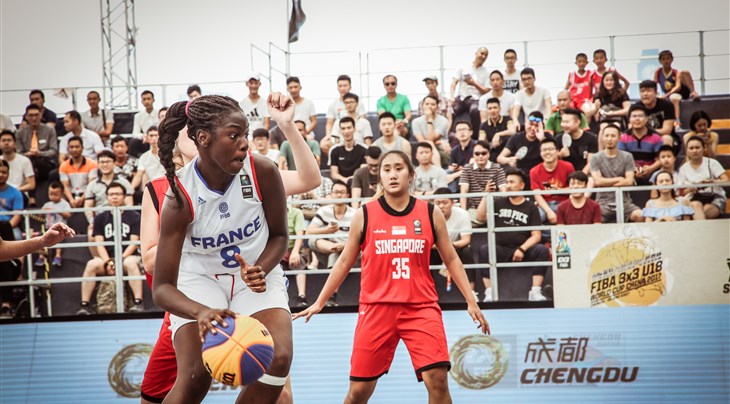 A total of 18 teams from 14 different countries will battle it out in the France Qualifier this weekend to qualify for the FIBA 3x3 U18 Europe Cup 2018, which be held in Debrecen, Hungary, on August 31- September 2.

In the men's category, the 10 squads are divided in 2 pools of 5 each. The pool winners qualify directly and the teams ranked 2nd and 3rd in their pool play a semi-final against the teams ranked 3rd and 2nd respectively in the other pool. The winners of these 2 semi-finals get the other 2 tickets to Debrecen.

Last year's U18 World Cup and Europe Cup winners Belgium will compete in France with a completely new roster, which includes the explosive 16-year-old Allen Mukeba. They will be in good company with hosts France, who earned bronze last year at the U18 Europe Cup and brought the loooooooooooonng Samuel Eyango Dingo (6ft 9 in, 2.06m) who helped France win silver at the FIBA Basketball U17 World Cup last month. Not to mention Slovenia, who finished 3rd at the U18 World Cup last season! Oh and did we say Turkey -who won the first edition of the competition in 2015 - will be in France too?

Keep an eye on Romania's Radu Petrescu, the #9 U18 player in the World. He might be U18 but he's already a 3x3 vet considering he played and finished 8th last year at the U18 World Cup.

In the women's category, teams are divided in 2 pools of 4. The pool winners qualify directly and the teams ranked 2nd and 3rd in their pool play a semi-final against the teams ranked 3rd and 2nd respectively in the other pool. The winners of these 2 semi-finals book 2 tickets to Debrecen.

The concentration of talent in Voiron is scary as 5 of the 8 teams mad e it to the U18 Europe Cup last year (Russia 2nd, Netherlands 3rd, France 5th, Belgium 6th and Latvia 11th).

2016 3x3 U18 Europe Cup and World Cup winners France are the favorites at home as they bring back Jessica Mavambou from last year's squad, who ranks 13th in the world. Don't sleep on Ligita Golovka from Latvia, who finished 2nd in scoring in the qualifiers last year.
The event will be livestreamed on FIBA3x3's YouTube channel.