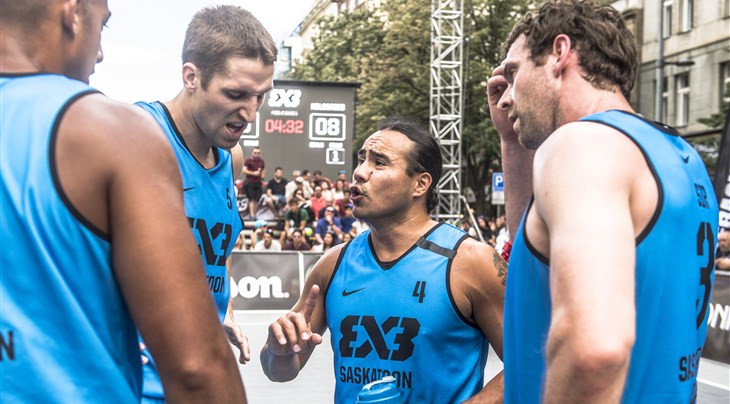 What’s new this year you’re asking? More Masters, more Money and more Men on a Mission to make it to the Olympics.

Like last year, episode 1 is set in Paris. The Paris of the Prairies aka Saskatoon, Canada. Where in 2017 the World Tour went more viral than the “In my Feelings” Challenge and we give you 5 reasons to watch the Saskatoon Masters for free on our Facebook and YouTube channels on July 21-22.

A shout-out to the reigning champs from Zemun, Serbia. The Z did not get many W this year after their star player The Dragon Bodgan Dragovic went down with a knee injury. It’s time that Zemun captain Lazar Rasic dominates the ball, that Lazar becomes Lavar.

Speaking of big mouths at 2, We`re so hyped about the Novi Sad – Princeton matchup in Pool A. The 3x3 court is just a big flex zone when Dusan Bulut and Dan Mavraides go at each other. Get the popcorn ready for a new episode of the US-Serbian rivalry.

At 3, another American we’re keeping an eye on is POWER dunker Doug Anderson who punched the rims like Anthony Joshua at the Lausanne Masters 2 years ago. On the other corner at the dunk contest, we have last year’s winner he’s Canadian, his name is Justin but he ain’t no Bieber. Justin Jus Fly Darlington.

Coming up at number 4, the Saskatoon Masters will have more Canadians than an NHL All-Star Game. Montreal and Winnipeg went Top 5 Top 5 Top 5 on every play last year. But last year’s finalists and crowd favorite Saskatoon are the team to watch this weekend. Don’t sleep on their star player Michael Linklater who’s got more handles than an Ikea store.

Last but not least, Stefan Stojacic is a big reason to watch the World Tour opener. The man known as Mister Robot has been hacking the 3x3 scene so far this season with Team Liman Tesla Voda. And already got access granted to 7 Masters this season, 2 more than anyone else.