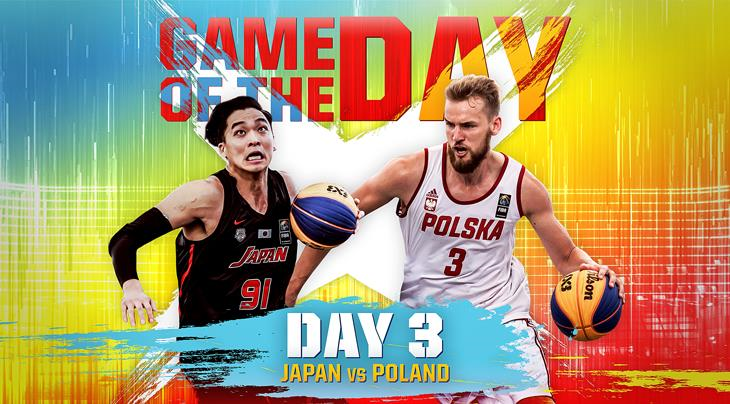 PHILIPPINES (FIBA 3x3 World Cup) - It's all about moving on to the Quarter-Finals, and Day 3 will surely explode with excitement like firecrackers on New Year's eve!

The Avengers may have the Hulk, but Estonia have their own version with 6ft 10in (2.09m) big boy Maik-Kalev Kotsar, and Poland will have to try and find a way to stop the Estonian Hulk from wreaking havoc.

Japan were among the best teams at the FIBA 3x3 Asia Cup 2018, but struggled badly on Day 1. The Japanese will try to right the ship against fellow Asian side Indonesia, who absorbed a helluva shellacking on Friday.

Karlis Lasmanis seemed like he was shooting into a jumbo laundry bin on Day 1 after scoring 17 points total, and the Croatians will try to put a lid on his offense in this game. Latvia need to be wary, too, since Croatia have shooters who can splash from way up in the rafters of the Philippine Arena.

Marielle Giroud turned a lot of heads with her scoring touch, which was sweeter than melt-in-your-mouth Swiss chocolate. France will certainly have their hands full against her, who led everyone in scoring with 20 points, but if the French put the clamps on Giroud, the Swiss could be in be in the red. It should also be a terrific rematch of their down-the-wire game from last year's 3x3 World Cup!

Led by Women's Player of the Day Paula Palomares, Spain were hotter than Jabañero chili on Day 1, beating Germany and Hungary, but they could be in for another juggernaut as they play 4th-seeded Netherlands, whose Quarter-Finals hopes could go up in smoke with another loss.